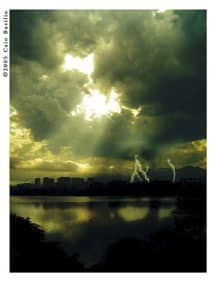 When reading reports of hair-raising cruelty, trusting God means knowing that the answers to why Israel is under attack are there, even if they are not obvious at the moment.

The current crisis here in Israel compels each one of us to develop greater bitachon, trust in God.

To understand what bitachon is, let's first define what it isn't.

Bitachon means trusting that: (1) God creates reality moment by moment in a way that reflects His awareness, involvement, and compassion; and (2) we would wish reality to be exactly the same way if we saw where present events are ultimately taking us.

God is aware of everything that takes place, including every thought that is entertained by every human being. Nothing can exist without God bringing it continually into existence. The fact that anything exists, whether it's a rock in the street or ant #8162 in this particular ant hill, is a revelation of God's constant will and awareness. Nothing happens without God's will.

But there's a vast difference between will and involvement.

Although God wills ant #8162 to exist, God is not intimately involved in the life of ant #8162. An ant is created to be part of something bigger than itself -- the ecosystem of the universe. Its life is meant to be lived according to the laws of what we will call for the moment "nature."

God created the laws of nature, and He continuously runs the so-called "natural order" according to those principles. And generally speaking, God will not alter those principles, and say, reverse gravity or alter the pull of electromagnetic attraction. (Although He did do just that at the time of the Ten Plagues.) However, even working within the laws of nature, God's timely intervention can only be labeled miraculous. And miracles are something that God does only for the benefit of us human beings who were created in His image.

To give an example from the current crisis: If a sniper fires a rifle at a slow-moving target, such as an Israeli on her way home from work, the laws of ballistics might dictate that the bullet will hit its target. But God (for whatever reasons) may decide that there will be a pothole in the road that will alter the path of the car just enough that the bullet misses and the life of the intended victim is saved.

God can also decide that there will be no pothole and the bullet will hit its mark.

In order to understand that the way God creates reality is also always compassionate ­-- whether the bullet hits or misses its mark -- let us look at an incident in the life of Moses.

God had instructed Moses to go to Pharaoh and tell him to let the Israelite slaves go. Pharaoh's response was to punish the Israelite slaves. He decreed that they not only had to make bricks but also to gather the raw materials for the purpose. Moses, shocked that as a result of his following God's directive, life was made much harder for his people, asked God: "Why are You doing evil to this people?"

In his question, Moses was admitting that God's will was incomprehensible to him. Nevertheless, the next time God commanded Him to do something, Moses obeyed with his whole heart.

True bitachon doesn't mean not having questions. True bitachon means resolving in one's own mind that the answers are there and that they are good, but that they may not be known to us at the moment.

The difference is whether we doubt ourselves (that is, our ability to comprehend everything) or doubt God.

The End of the Story

No one in the middle of a story is able to see the end of the story. Bitachon means believing that there is an end to the story, and that if we could know the end we would have no doubts now.