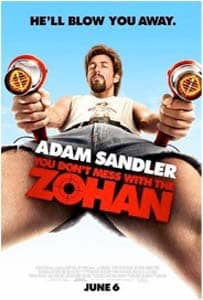 The trailers were hard to miss: Adam Sandler leaping from rooftops, catching terrorists' bullets with his bare hands, and going all "Crouching Tiger" on some bad guys. But the comic idol wasn't aiming to be the next Arnold Schwarzenegger. It was Sandler as an Israeli Mossad agent wunderkind whose fondest dream is to leave the high-intensity world of international intrigue and become a hairdresser. Comedy undoubtedly ensues.

Being an icon of American Judaism lite (his "Chanukah Song" is still a holiday staple), it is something of a logical progression to see Sandler playing an Israeli in You Don't Mess With the Zohan (2008). Still, he looks and sounds more like a parody, or a broad sketch, of an Israeli than the real thing: sandals and cutoff jeans; a bushy goatee and Jewfro; tortured English grammar; and an insistent, ringing chorus of "no, no, no" that punctuates his conversation.

Something's Not Quite Right

Sandler gets some aspects of Israeliness right, but the accent is subtly off -- more Italian than Israeli -- and the overall result is like a mash-up of every Israeli stereotype known to man. Zohan is a killer with bad fashion sense, a secret agent who likes wearing Mariah Carey t-shirts to kick some terrorist butt.

Sandler's Zohan is the latest in a fairly lengthy line of Hollywood depictions of Israelis. As always, it is an American (or Brit or Australian) playing the Israeli role, illustrating the central paradox of such portrayals: that they consider Israelis close enough kin to Americans that Americans can play them, but nuance and subtlety are sacrificed to that familiarity. Has Hollywood ever gotten Israelis right?

If they haven't, it's not for lack of trying. Hollywood was churning out Israeli-themed movies soon after the establishment of the state of Israel. In that earlier, more romanticized time, Israelis were heroic pioneers, successors to the law-bringing gunslingers of the Western film. At the same time, Hollywood's general lack of interest in portraying reality meant that small matters such as proper Israeli speech, dress, and looks were subsumed under the sheer firepower of star appeal.

Casting was essential to the process. Blue-eyed, sandy-haired Paul Newman met no one's idea of a stereotypical shtetl Jew, and that was precisely the point of casting him as the brawny, heroic Ari Ben-Canaan in Exodus. Based on Leon Uris' beloved bestseller, Otto Preminger's 1960 film was among the first Hollywood films to embrace Israeli characters, and helped set the tone for what was to follow. Israelis were relatable characters just like us, these movies said.

More to the point, after decades of the studios (almost all run by Eastern European Jewish immigrants) avoiding mention of Jews or Judaism, a belated sense of Jewish pride (or guilt) kicked in and demanded Jewish heroes. Where better to look, then, than Israel? Exodus does not entirely shirk centuries-old notions of Jews as puny and weak, more brain than brawn--Sal Mineo's shrinking Dov Landau assiduously hews to that stereotype. But Newman, with a legendary swagger and quiet confidence, sought to break the mold, making the Israeli a kind of New Hollywood American: tough, brilliant, and impossibly dashing.

In that era, when the studios were still strong, the idea of having anyone other than an American playing an Israeli would have been anathema. That was what stars were for--bringing in audiences for the studios' gain. Besides, there were no Israeli actors high profile enough to star in a Hollywood picture.

Regardless, the casting of uber-WASP Newman, like that of so many clearly non-Jewish actors in Israeli roles in future films, was itself the point. After the Holocaust, when Jews had been singled out for their supposed racial characteristics, American films were going out of their way to demonstrate that anyone could be Jewish--even Paul Newman.

Cast a Giant Shadow (1966) continued what Exodus had begun, with Kirk Douglas as a half-American, half-Israeli hero. Playing Mickey Marcus, the Jewish American army officer whose astute guidance helped the Israeli army triumph in the 1948 war, Douglas (himself Jewish, born Issur Danielovitch) exudes the same radiant glow that Newman had.