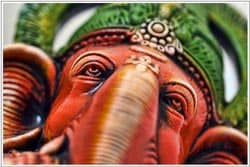 Hinduism is India's indigenous religious and cultural system, followed today by over one billion adherents, mostly in India but with large populations in many other countries. Also called Sanatana Dharma, "eternal religion," and Vaidika Dharma, "religion of the Vedas," Hinduism encompasses a broad spectrum of philosophies ranging from pluralistic theism to absolute monism. It is a family of myriad faiths with four primary denominations: Saivism, Vaishnavism, Shaktism, and Smartism. These four hold such divergent beliefs that each is a complete and independent religion. Yet they share a vast heritage of culture and belief: karma, dharma, reincarnation, all-pervasive Divinity, temple worship, sacraments, manifold Deities, the many yogas, the guru-shishya tradition, and a reliance on the Vedas as scriptural authority.

From the rich soil of Hinduism long ago sprang various other traditions. Among these were Jainism, Buddhism, Virasaivism, and Sikhism, all of which rejected the Vedas and thus emerged as completely distinct religions, dissociated from Hinduism, while still sharing many philosophical insights and cultural values with their parent faith.

Not unlike all the other major religions of the world, Hinduism has no central headquarters. Nor do the Christians, Jews, Muslims, or Buddhists. They all have many who represent and function as secretariates for their various denominations. Hinduism is no different in today's world. It has had many exemplars in the past and will in the future of its denominations and the teaching lineages within them, each headed by a pontiff.

Critics have pointed out that Hinduism is not an organized religion. In truth, they are correct. For 1,200 years Islamic and Christian rule in India, Hinduism's central citadel, eroded greatly upon its perpetuation. Yet it survived. In today's world it may be accused of being a poorly organized religion, but it's getting better daily, as a few minutes on the World Wide Web will prove. Its temples and active organizations encircle the world. Whatever its faults, it has kept the fires of sadhana and renunciation, of unabashed spiritual life and yoga disciplines alive. No other faith has done that to the same extent. No other major ancient faith has survived the assaults and the insults of the Abrahamic faiths. Hinduism's nearly three million swamis, gurus, and sadhus work tirelessly within, upon, and among themselves and then, when ready, serve others, leading them from darkness into light, from death to immortality.

What Makes One a Hindu?

Those who follow the Hindu way of life are Hindus. In the Mahabharata the great King Yudhishthira was asked, "What makes a brahmin -- birth, learning, or conduct?" He replied, "It is conduct that makes a brahmin." Similarly, the modern Hindu may well state that it is conduct, based upon deep, practical understanding of dharma, karma, and reincarnation that makes a Hindu. After all, he might muse, is not a true devotee whose heart is filled with faith in and love for his Ishta Devata and who lives the Hindu Dharma as much a Hindu as his agnostic neighbor, though the first was born in Indonesia or North America and the second in Andhra Pradesh?

Shri K. Navaratnam of Sri Lanka, a devotee for some forty years of Satguru Siva Yogaswami, in his Studies in Hinduism quotes from the book, Introduction to the Study of the Hindu Doctrines: "Hindus are those who adhere to the Hindu tradition, on the understanding that they are duly qualified to do so really effectively, and not simply in an exterior and illusory way; non-Hindus, on the contrary, are those who, for any reason whatsoever, do not participate in the tradition in question." Shri K. Navaratnam enumerates a set of basic beliefs held by Hindus: