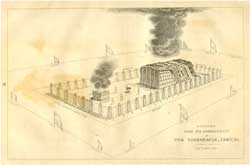 Last week we talked (in detail) about the sacrifices for different occasions. This section of the Torah continues that conversation. It goes into detail about what to do with each part of the sacrifice and how to complete the sacrifice.

The very important part of this parasha is that G-d told Moshe to tell Aaron that he must keep the fire burning and it must never go out! For the burnt offering, the Torah tells us that the Olah or burnt offering was to be left on the altar all night till it was ashes. Then the priest was to take the ashes out of the camp. When it talks about the meal offering or Mincha, it was to be brought to the altar and, after a handful was burned, the rest was to be eaten by the priests.

Bonus for all the hard work? The priest who offered the Olah got to keep the animal's skin. Sounds a bit morbid to us but that is pretty valuable when winter rolls around.

The last offering is the Shelamim or peace offering. This was definitely a BBQ. The priest offered this and then the people could enjoy it. However, it is very clear that after the second day the leftovers had to be tossed... lack of refrigeration = spoiled meat!

Here we learn part of our laws of Kashrut (keeping kosher). The Torah tells us that if the meat touched anything unclean, it could not be eaten. And it is clear that we cannot eat any of the blood. That carries through to today. All kosher meat has the blood removed prior to eating. (I know this sounds logical, but it isn't as common as you would think. What do you think kosher salt is for? The salt isn't necessarily kosher; it is for koshering!)

The last bit here about sacrifices acknowledges the person who brought it. He couldn't send someone to do it for him; he had to bring it to the priests himself. The priest would care for the sacrifices once it was presented. The breast meat would go to the priests and the right thigh to the specific priest who handled this sacrifice directly.

The next part of this portion deals with the priests themselves. G-d told Moshe to round up Aaron and his sons to be anointed. Moshe washed and dressed Aaron and his sons in the priestly garb and then anointed them with oil (rather messy process if it happened like I think it happened... poured over the head?!). Moshe went through several sacrifices with them and then told them to stay in the Tent of Meeting (Tabernacle) for seven days to finish their initiation as the priests.

A special thanks to G-dcast for the weekly parasha cartoon.

This Shabbis is again a special one. We call this Shabbis Shabbat HaGadol, the Great Shabbat, because it is the Sabbath right before Passover begins. Therefore there is a special haftarah to read, Malachi 3:4 - 24. There are many different opinions as to why this happens, but let's talk about Malachi.

Malachi is an ideal book to read at this time when we go back and relive the slavery and heartache of Egypt. Malachi reminds us to trust in G-d, no matter how hard the situation. Another part of this book is the reminder to help others. When we remember that we were slaves in the land of Egypt, we are reminded that there are people in our world who are still slaves today (not always in the traditional sense).

It is important to always give back. And lastly, these are the last words of the last prophet in our TaNaCH (Torah, Nivim [prophets], and Chetuvim [writings], which comprise the Jewish bible). And in the last section of Malachi, it calls upon what Moshe has taught us and tells us that Eilyahu (Elijah) the prophet will come to us. Because of this, we pour Eliyahu a glass of wine at our Passover seder and even open the door, encouraging him to come.