The parasha (weekly Torah portion) for the week ending March 13 is a doozy! This week we read three sections:  Vayak'hel and Pekudei are the main portions, and HaChodesh is tacked on because this Shabbis is the special Shabbis before the month of Nissan begins. 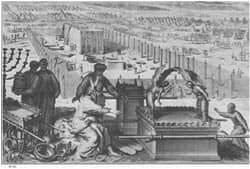 The interesting thing about this double parasha is that it recaps the previous portions we have discussed. This parasha revisits the rules and building specifications that were laid out for us in Terumah, Tetzaveh, and Ki Tisa regarding clothing for the priests and accessories.

So here Moshe reiterates that we must fulfill the commandment to observe Shabbat. Then he tells us that G-d has told us to build something very special, something that will use all the instructions G-d has already given, plus many more. We are told to build the Mishkan (Tabernacle). Just like any major building project, it needs resources. The people enthusiastically bring what is required (must be making up for the little Golden Calf incident...) They bring goat hair and animal skins, wood, precious stones, spun linen, blue and purple and red-dyed wool. They also bring copper and silver, gold, olive oils, and herbs... so much that Moshe has to say stop!

With Moshe as the general contractor, the builders and talented artisans build the Mishkan and the interior furnishings (all based on the details in the three previous parashot). How is this Mishkan built, you ask? Fortunately, there are copious notes!

Clearly, there is a lot to do to prepare the Mishkan. The last thing is to count and record the donations of gold, silver, and copper that the people had brought to donate for the making of the Mishkan. Betzalel and Ahaliav, along with their assistants, are charged with making the priestly garments that were described in Parasha Tetzaveh.

Finally all the pieces are finished, but it is Moshe's job to erect the Mishkan. He assembles the whole complex and then anoints it with the holy oil. Afterward, he anoints his brother Aaron and Aaron's four sons as priests of the Mishkan.

Moshe and the People of Israel followed a cloud during the day and a pillar of fire at night. Once the Mishkan is built, the cloud appears over the complex and the people know that there is a divine presence dwelling there.