Unlocking the 'Hidden Power of Gospels'

My family line goes back into one particular village in Lebanon for more than 900 years on both sides -- both on my mother's and father's side of the family. This deep mystical strain ran through village life and through my grandparents who were clearly, to me, the wisest people I will ever know. They were people who lived very close to the earth, very much following what today we would call an inner wisdom or inner guide. That would not be their language to describe themselves, but that was the experience.

You grew up with feet in more than one world. Maronites are Christians. They're Catholics who look to Rome. But they're Eastern-Rite Christians.

The Maronite tradition is one of the rare Eastern Rites that, in the split between Constantinople and Rome, wound up choosing Rome. In that choice, Rome actually took Maronites to Rome and created a school for them. Many Maronite priests were going to school in Rome, then going back to Lebanon. That opened up a very interesting East-West conversation that bridged people over a very long period of time.

So, you write as a scholar representing more than one world. In some ways, you're an outsider as a Bible scholar. Your background is in psychology and education, and you're not, let's say, someone with a doctorate in biblical studies. Yet, the cover of your new book has a whole lot of heavyweight insiders recommending your work: Brian McLaren, Phyllis Tickle, Diana Butler Bass.

I don't think it will surprise you if I say that I feel like both an insider and an outsider.

As an insider, I have worked in and for the church all of my professional life. But, I also fully understand why this book and this message may appear as an outsider's message. It's coming from someone whose doctorate is in clinical psychology. My academic credentials are not theology or scripture study. So it does seem like an outsider offering a redefinition of the gospels.

My personal journey has been through mainline Christianity, along with a wide, compassionate and universal understanding of our journey. The message in this book is touching people, all the way from those who are disaffected totally by religion, to those who have been hurt by Christianity and who are looking for a way back in, to evangelical ministers and congregations.

Maybe this insider-and-outsider question means that there's a wide center in our human experiences.

One might guess, at first glance, that you and the Bishop of Durham N.T. Wright have nothing in common. He's a traditional Christian leader and teacher. You're an innovator with your fresh approach to spiritual discernment. But, if readers correctly understand your book, I think you and Tom Wright are leading people toward the same destination: a powerful, personal encounter with the gospels that leads, in the end, to actual service in the world. Am I correct in saying that?

The critical moment in Sunday services is that last prayer that basically says: Get out of here and get to work! This isn't about gilding the temple. It's about living a value that understands true and deep dialogue with our world, work that is going to move the planet in positive ways.

I think with some variations, you and Wright are pointing toward somewhat different pathways that lead toward the same goal.

I think what we're talking about right now actually is one of the largest questions of this new century. How do individual journeys include the community and, at the same time, how does the community respect the individual? This is going to be a big question for those who have come alive with a sense of their own personal journey. We've got to find ways to develop communal life while still being deeply respectful of the individual.

Growing up in a Lebanese community, I've always been aware of the limitations and the possibilities. My community, growing up, was not a community that encouraged freethinking. Then, in college and beyond, I had to figure out how to think for myself outside the clan.

The question is: How do we build community that respects the individual journey? The communal life needs to be that place where we live for ourselves, for others, and for the world.

How do we build communities that are diverse? How can that diversity become a rich soil for transforming the community, the world and ourselves?

This is hugely difficult.

Yes, we're trying to do things here that we have not done in human history. For a long time in human history, people perfected tribal communities, but that can no longer be our definition of community.  That's why my book starts by laying out the individual journey. But, then by the time we get to the gospel of John -- and, after that, the fourth path in the gospel of Luke -- we're seeing how the community also is necessary in our journey. The community shapes our path toward service. 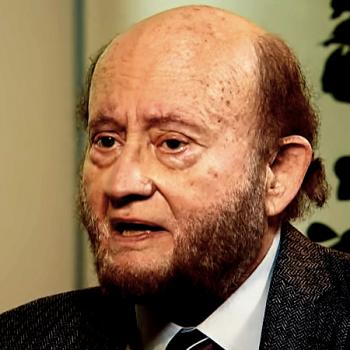 Good news: Religion is fast going down the tubes in America
Barry Duke
2

Seeking Solace in the Face of Ambiguous Loss
Hebrew College Wendy Linden
Get Patheos Newsletters
Get the latest from Patheos by signing up for our newsletters. Try our 3 most popular, or select from our huge collection of unique and thought-provoking newsletters.
From time to time you will also receive Special Offers from our partners that help us make this content free for you. You can opt out of these offers at any time.
see our full list of newsletters
Editor's picks See all columnists