Rodney Stark is a prominent and prolific sociologist and historian of religion. His Curriculum Vitae lists 28 books and 144 articles, many of which have reached a broad academic and popular audience. Often controversial, and known as a challenger of conventional wisdom, Stark once described himself as neither religious nor atheistic, but later came to understand himself as an "independent Christian."

After four decades as a professor, Stark is one of America's preeminent scholars of religion, and serves as co-director of the Institute for Studies of Religion at Baylor University.

He spoke by phone with Timothy Dalrymple for Patheos' Evangelical Portal about his latest book, God's Battalions: the Case for the Crusades. 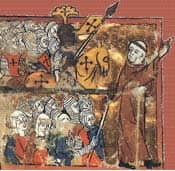 You are well known as a buster of historical myths. Your latest book takes on one of what most Americans would consider a truism: that the Crusades were simply evil and irrational. Why reassess the Crusades?

Because the Crusades are often understood within a larger framework that says that Islam is the gentle faith and Christianity the violent one. Karen Armstrong would have us believe that Muhammad was a pacifist. Take Major Nidal Hassan, the man responsible for the Fort Hood massacre. Had an evangelical Christian of the nutty sort gotten up in front of Army psychiatrists and talked about how much he respected people who shot abortionists, he would have been out of the Army an hour later. But everybody tiptoes around the issue of Islam.

Several months after 9/11, former President Clinton gave a speech at Georgetown University in which he apologized for the Crusades. He said we had much to be sorry about, and we bore some of the guilt for sending those airplanes plunging into the Twin Towers. Now, Clinton isn't a nut. He's not an anti-American. He's just been miseducated. He's been told a whole lot of nonsense about the Crusades.

The notion, for example, that the Crusaders went to get loot and land and riches is made absurd by the survival of hundreds and hundreds of mortgages that have been found in the archives at various monasteries and convents. These people mortgaged away everything they owned in order to get the money to march East. They went at enormous personal cost. Most of them died. They knew there wasn't anything out there in the sand that was going to reward them for going.

The Crusades did not arise ex nihilo, but were part of a broader historical and geographical narrative. Can you tell us about that?

The fact is that Islam had been attacking the west for more than 400 years before the Crusades began. Shortly after the death of Muhammad, the armies started marching. They took the Middle East, which was a Christian area beforehand. They took the Holy Land. They took all of North Africa, which had been mostly Christian. They went across the straits and took most of Spain. They took southern Italy. They took Sicily. A Muslim army marched up within 150 miles of Paris before they were turned around and run back out.

The point is that an aggressive, invasive warfare had been going on between Europeans and Islam for hundreds of years. Shortly before the First Crusade, the Normans drove the Muslims out of southern Italy and Sicily. But the Muslims were still in Spain. As a matter of fact, about thirty years before the First Crusade, the pope tried to get a Crusade going to Spain, which was about half-reclaimed at the time. And that presents an interesting contrast. Spain was close; you didn't have to march 2500 miles; and there were riches to be had in Spain. Yet nobody went. The reason nobody went, and then thirty years later they all went, if you will, is because nobody believed that Jesus had walked around in Spain.

It really was a religious Crusade. If you don't believe it, all you have to do is look at the mortgages, documented by Riley-Smith, where the people taking out the mortgages go on at length about why they're borrowing the money in order to go. It was about Jesus.