Is Paganism a Technology-Based Religion? 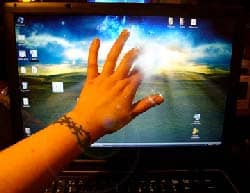 Paganism is known as a group of nature-based religions. Nature is eternal, and molecules, cells, organisms, matter, and energy will still be going strong long after humans are forgotten. Yet, if the earth is constant and we adore the natural cycles of the seasons, why did it take so long for Paganism to revive after the death of Julian? Could technology, and the control of it, be the reason?

The Hephaisteion in the Agora was an embodiment of Greek pride after the Persian invasion, a tribute to the manufacturing and industrial centers in Athens. As befits a temple dedicated to Hephaistos, the God of invention and technology, and the Athena Ergane (Worker), it is the best preserved Greek temple.

Today the Gods of technology and industry aren't as popular. They're not as romantic, not as full of moonlight and mystery. This is a shame, because the rise of modern Paganism could be due to advances in technology, which allow us to work smarter and be more effective, better informed, and engaged in larger social circles.

When the Emperor Julian died, all hope for the survival of Paganism seemed to die with him. For the next 1500 years Christianity cornered the market on spirituality in Europe, keeping all other faith traditions fragmented, hidden, and on the fringe. While there were individuals who held fast, and possibly small groups that carried on, the temples were overtaken, the festivals transformed or disbanded, and the practice of Pagan religion made an illegal and dangerous business.

In 815 a devotee of Apollo couldn't post an ad in the paper looking for like-minded folk with whom to explore oracular divination. In 1145 a Witch could not anonymously participate in divination forums on the internet. In 1642 a Heathen couldn't take public transit to the latest pub moot.

The occult revival of the late 19th century took place when new forms of transportation and communication abounded. Trains had become a part of daily life, newspapers were more widespread and available than ever before, and people were flocking to cities for industrial work, finding special interest groups in the anonymity of metropolitan areas.

Free speech had been considered a right for a century and a half by most of the Western world. The first buds of religious plurality were blooming as Spiritualism, Theosophy, and Unitarian Universalism pushed at the boundaries of a predominantly Christian society. Freud suddenly opened up the world of the mind as something quantifiable by science. Jung married mythology to psychiatric sciences. Folklorists and anthropologists began studying ancient Pagan societies as reasonable, rational, and virtuous instead of broadly painting them as decadent, immoral, and superstitious. Darwin and Graves suggested that the early history of humanity didn't conform to the creation myths of Abrahamic religions.

Regardless of your feelings regarding Margaret Murray's books on Witchcraft, you have to marvel that suddenly she made the idea of an underground Pagan resistance to the Christianization of European culture seem attractive and possible. Given the murky history of Wicca, it's possible she may have unwittingly invented it when her readers decided to live the history she presented. Finding folks interested in recreating a medieval Witches coven was easier than it would have been just a generation earlier.

Had Gardner spoken at a Theosophical meeting in London he may have garnered a few students, but by appearing on talk shows and news broadcasts he suddenly announced that Pagan religion was alive and well to every single Brit with a television. Alex and Maxine Sanders became involved in music and film, magazines like Green Egg and Earth Religion News caught the wave of the counter-culture, and archaic laws against Witchcraft and divination were being repealed.

Newsletters, newspapers, and the ability to travel long distances to festivals helped keep the Pagan community steadily growing through the ‘80s but it was in the 1990s that it could be said technology transformed Paganism forever.

The internet. Do remember what it was like before it? Can we even comprehend all the ways it transformed modern Paganism? Suddenly anyone interested in Paganism could network and find basic information as long as they had dial-up internet service. Pagans rushed to publish materials that had been handcopied, photocopied, and carefully preserved for decades onto sites where anyone could view them.

As a teenager in rural Georgia I was anonymously discussing theology, ritual, meditative trance, and mythology with Pagans from around the world, all without leaving my room or my mother suspecting I'd become a spiritual rebel. Thousands of Pagans suddenly found community without ever having to leave the "Broom Closet."