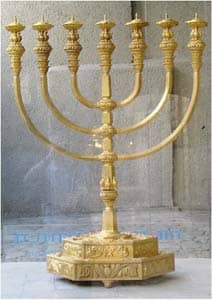 The parsha (weekly Torah portion) for the week ending May 29 is Beha'alotecha. Beha'alotecha means "when you step up" in Hebrew and is the eleventh word (and first distinctive word) in the portion. Be sure to check out the cartoons at the end for a great perspective on the Torah portion. This week's cartoon is very good, a great Beha'alotecha song!

This week, G-d tells Moshe to tell Aaron to take the seven lamps in the Tabernacle and build a stand for them. This becomes the Menorah. No, not the Chanukkiah that we light on Chanukkah; this one only has seven lamps, not nine (eight days of Chanukkah plus the shamash, the helper candle). Next, G-d instructs Moshe on how to prepare the Levites. They have to shave their whole bodies and wash their clothing, then be sprinkled with special water. Then the Israelites were to gather around and put their hands on the Levites. While that was happening the Levites were supposed to lay their hands on two bulls, one a sin offering and the other a burnt offering.

The next section deals with a second Pesach (Passover). So we've made it out of Mitzryaim (Egypt) and G-d told us to celebrate that on a specific day with a sacrifice. Well, what happens if a man were unclean (because he came in contact with a dead body)? He certainly couldn't give the offering then. So G-d tells us that if you couldn't observe Pesach at the proper time, you must make the offering on the 14th of Iyar. This is appropriately called Pesach Sheni or second Passover.

Now, I know what you are thinking . . . or at least, I'm thinking this . . . so if a person can't bring a sacrifice for Pesach, they had to observe this second one, but since the Holy Temple has been destroyed, none of us can bring the sacrifice. So today, some people have the minhag (local custom) to eat matzah during the day on Pesach Sheni to mark the Pesach sacrifice. To go a bit deeper, in Chassidic circles, Pesach Sheni is considered a date of second chances -- recognizing that G-d gives us the opportunities and second chances we need.

Remember when we were travelling through the desert? And we followed a cloud during the day and a fire at night? Our environmental phenomena haven't abandoned us yet! In Numbers 9:15-16 the Torah tells us that the cloud perched itself on top of the Tabernacle during the day and the fire up there at night. And if they moved, so did the Israelites. This fire figured prominently before watches and calendars, and so the trumpets and horns in the next verses. Since everyone didn't have a multi-purpose sundial/calendar watch on their wrists, the community used the fire and horns to let the people know when it was a holiday or they needed to gather. Think primitive PA system.

When we get to Numbers 10:11-12, the cloud lifts up and sets off at a nice trot. The Israelites have to pack up quickly (not only their own tents but the Tabernacle, too) and follow. They hike for three days before they reach the next spot. Now let's think about this. You've been in the desert for over two years now. There is sand in your shoes, in your hair, everywhere. Frankly, you can't remember when you had a nice dip in a river. This little camping trip is losing its appeal and honestly, was slavery that bad? I mean you had chicken and vegetables . . . All you've been eating for the past two years is mysterious substance called manna. The complaining rumbled louder and louder . . .

At first they did it quietly, but G-d heard. Then they were louder, and G-d still heard. Finally Moshe had enough of it. He went to G-d and said angrily,

Why have You treated Your servant so badly? Why have I not found favor in Your eyes that You place the burden of this entire people upon me? Did I conceive this entire people? Did I give birth to them, that You say to me, 'Carry them in your bosom as the nurse carries the suckling,' to the Land You promised their forefathers? Where can I get meat to give all these people? For they are crying on me, saying, 'Give us meat to eat.' Alone I cannot carry this entire people for it is too hard for me. If this is the way You treat me, please kill me if I have found favor in Your eyes, so that I not see my misfortune.  (Chabad.org)