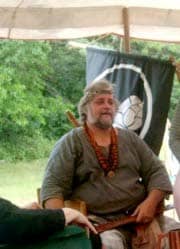 I sit by the fire, lost and alone
Four empty places, and one who stayed home.
I drink to my kin
Who walked Njord's road
I drink to my kin who'll drink here no more.
~ "Gather Ye Pipers," Mikal the Ram

The funeral had no coffin. I don't know if that meant that Mikal the Ram preferred cremation, or if he and his wife decided they'd rather not display the body. I didn't ask Roberto or Helena about it. I had, after all, only met Mikal the Ram once. I wasn't sure I even had a right to be at the service, much less to question it.

The funeral program called him "J. Michael Shew." I'd never heard that name before. It looked like it was going to be a long funeral, with more than a dozen speakers. The epigraph took me by surprise in more ways than one:

We sat in a dim Protestant church with cream-colored walls and a dark brown carpet. The modern building lacked sober artistry of the medieval, which I felt ironic, given what I knew of Mikal. Two podiums sat at the front of the hall and, in front of them were a series of tables covered with his possessions: t-shirts from Lilies Wars, a sheepskin that I recognized from when it hung from his shoulders, set designs from church plays, and failed get-well-soon cards from his students. An illuminated scroll, proclaiming Mikal the Ram's promotion to Laurel of the Society for Creative Anachronism (SCA), dominated one table. To the right a projector showed photographs from his life, before the brain tumor finally got him.

I sat with Roberto, Helena, and the rest of our SCA family. The three elders sat in the row in front of us. They all looked like they had been crying. I've got no idea how old they actually are, but they seemed far older than they had before.

Modar -- the head of the household, balding, bearded, with large glasses -- shrugged. "We have our good weeks, and we have our bad ones. This is has been one of the bad ones."

I guess I should explain the names. Roberto and Helena are, legally, Chris and Debbie; Modar's real name is Ron. They tend to call me Aldheim, though of course, that's not my name either. People make up new names for themselves in the SCA. Sometimes those names mean more to us than the ones our parents gave us; I once heard Roberto's father slip and call him 'Berto without thinking.

The SCA is a strange nerd subculture. Every weekend, we drive for hours to get to events, where we dress in clothing that hasn't been in style for six hundred years and tell lies and drink homemade wine and argue about tinctures and blazons until it's time to drive the hours and hours back home again. We take it as an excuse to buy obscure books about the Middle Ages, and bash each other in the head with wooden swords, to read old sagas and poems about the Anglo-Saxons and the Old Norse and the Byzantines, to tell stories to those who would hear them. So it had been with Mikal the Ram, as well, who had been a famous bard within the society when he was alive.

The family started talking about Mikal to pass the time before the service began. I stopped talking, myself. They had all known him for years, having seen him at least once every couple of months without fail for a decade or more. But then, they were not children, as I felt I was, sitting in that church. Churches always make me feel uncomfortable.

I am not a Christian. I never have been. My parents were, once, but they became Wiccan in their 20s, so I was raised a pagan. I had never been inside a church for anything besides a wedding or a funeral until my sophomore year of college, and I still find them to be strange, intimidating places; my idea of a temple was my living room, not a vaulted place full of stained glasses and crucifixes. I felt under my tie for the silver Thor's Hammer I wore around my neck and rubbed it for luck.

I knew the services were starting because Roberto quit talking. Only momentous events prompt his silence. The photographs faded from the wall, and soon people started coming in from all sides of the church: Mikal's wife, the dozen or so who would speak to us during the service, and the preacher. They came in to the sound of bagpipes and drums, played by men in kilts who followed them into the room.

The first speaker opened with Edna St. Vincent Millay's "Dirge Without Music." A poem to mourn a poet. I wondered if in his final days in the hospital, cancer eating away at him, Mikal had planned his own funeral service.