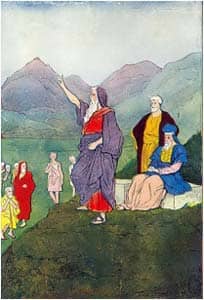 The parsha (weekly Torah portion) for the week ending July 31 is Ekev. Ekev means "if [you follow]" and it is the second word (and first distinctive word) in the portion. Be sure to check out the video at the end of this article!

Parshat Ekev is sort of a continuation of the previous parshat, Va'etchanan. In fact, the whole book of Devarim (Deuteronomy) so far has been one big long lecture by Moses to the people of Israel. It's kind of like your grandpa when he keeps lecturing you about the ‘old days' and telling you about your family. The Israelites are like young children who are bored by his long lecture. They don't understand why Moses won't just let them go into Israel. The people say, "Yeah, yeah, we get it already, Moses." But Moses stops them harshly, reminding them that clearly these concepts have not sunk in because of the mistakes they have made in the past. He points out the times they forgot about G-d: the Golden Calf, the first set of tablets Moses broke, the pleading Moses had to do before G-d for the people to have a second chance, and the whining and complaining throughout the journey.

Moses warns the people that just because they were allowed to enter Israel does not mean this process will be easy; however, the way to ensure success is to follow G-d's commandments and never stray from G-d. G-d directs the Israelites to fight hard to conquer the land and completely drive the people out or else they will be doomed to unrest. Also, Moses points out that the time spent wandering the desert was not just an aimless trek. G-d provided manna for them everyday, a humble but bountiful food. Not only must man have food to live, he must remember who created all the food -- G-d.

Moses goes on to describe the land they are about to enter. This whole time they have been standing on the banks, on the precipice of entering this land. And Moses knew when that day came, it would be his last. As they stood there, looking into Canaan/Israel, Moses tells them that the land is flowing with milk and honey as well as being full of the "Seven Species." These Seven Species (or Seven Kinds) are wheat, barley, grapevines, figs, pomegranates, olives, and dates. These were abundant in the area and have become focal points within Judaism.

Lastly, Moses gives us the second part of the Sh'ma. It repeats the mitzvot in the first chapters and goes into some of the rewards for fulfilling G-d's commandments and the undesirable effects of ignoring them. Here it says (both in the Torah portion but also in the Sh'ma/V'ahavta):

"You will keep these words in your heart and in your soul. You will bind them as a sign upon your hand and they will be a reminder between your eyes. You will teach them to your children and you will discuss them in your house and when you are out, when you lie down and when you get up. You will put them on the doorposts of your house and on your gates."

Well, what does that mean? Why is this so pivotal to the Jewish people? Well, let's break it down. "You will keep these words in your heart and in your soul." This one is pretty clear, right? These aren't words that can or should be easily dismissed.

"You will bind them as a sign upon your hand and they will be a reminder between your eyes." Okay, this part may not be so obvious. We need to be reminded about this obligation and our connection to G-d. Therefore, men wear Tefillin. Would that make more sense if I called them phylacteries? Probably not. Phylacteries is the Greek word for the Hebrew word Tefillin. They are small black boxes with leather straps. One is attached to the arm and the other to the head. This prayer and several more are placed inside. Hence, your hand and your head.