Who Really Cares? Ordination and Marriage Equality in the Mainline Church

For many of the American mainline Protestant denominations -- the Methodists, the Lutherans, the Episcopalians, and my own Presbyterians -- the word that evokes the most fear and anxiety is "schism." In most cases, the more conservative members of these denominations leverage the threat of leaving to keep their denominations from extending the full rights and privileges of membership to gay, lesbian, bisexual, and transgender persons.

True enough, after the Evangelical Lutheran Church in America (ELCA), the largest Lutheran Denomination in the U.S., voted to allow gay and lesbian persons in covenantal relationships to be ordained as clergy, some congregations indeed voted to leave the ELCA, though there numbers are far smaller than many had predicted. Coverage of the Episcopal Church in the U.S. media is full of stories of congregations splitting off and attaching themselves to more conservative diocese, sometimes, overseas. In the Presbyterian Church, after the passage of a modest proposal that would allow greater freedom to ordain gay and lesbian persons on a case-by-case basis, some congregations left to join a more conservative branch of Presbyterianism.

But, of course, following through on a threat to leave is a card you can only play once -- and any faction within a divided body learns quickly that threatening to leave, without actually leaving, along with withholding money, are the most effective tools in preventing unwanted change.

While our churches worry about splintering, many of us, from all theological perspectives, know full well that what really threatens our vitality is not so much our theological divisions, but our age. Death will catch up to us before division will. I'm 47 -- fourteen years younger than the average Presbyterian. We have a problem.

The progressive and conservative factions within mainline denominations are a bit like a bickering old couple. After not much time at all, the fight itself is entirely predictable; you already know what one party or the other will say before they even say it. After a while, the young people at the table start to drift away. Not only are they tired of the fight, but they are not even interested in the topic of debate. They've made up their minds, or they no longer care. Meanwhile, our old couple remains locked in their argument, only looking up to realize they are the only two left at the table. Just who drove the children away becomes one more weapon in the same old war. It's depressing!

While our denominations continue to argue over ordination and marriage equality for LGBT persons, the next generation, those under 35, have already made up their minds. Overwhelmingly, this generation supports equal rights and "equal rites," and churches that remain locked in the same old struggle hold no interest for them. In two words, the advice from those born after 1975 to the church, if they cared enough to offer it, would be "Move on!"

And Protestant mainline Churches will move on. Some already have. Church observers, even many on the theologically conservative side, expect that U.S. mainline Protestants will continue to move toward greater openness and inclusion of LGBT members. It's more a question of when than whether. Maybe the next question to ask is, will it matter? Will the generation born after 1980, say, care enough to come back? Will mainline congregations have enough energy and resources left after the long battle to reach out with any effectiveness to those who have, so far, steered clear?

Of course, the only interesting part about making predictions comes in the delight for someone else, in the not-so-distant future, in pointing out just how spectacularly wrong you were. Nowhere is this more true than in matters of faith. Who predicted the first Great Awakening, or the second, or the rebirth of Pentecostalism in the beginning of the 20th century? Christians would chalk this up to the unpredictable nature of the Holy Spirit, a wholly unsatisfactory explanation to any sociologist, but there you have it.

My own biases are surely evident already. A gay Christian seeking to be ordained in the Presbyterian Church since 1986, my own journey of faith has led me to hang in there with the church that has raised me, and which has shaped my core identity as a believer. Of necessity I have hope for my Church -- hope not only that it will, and one day soon, embrace the gifts, affirm the calling, and bless the marriages of LGBT persons, but indeed, that it will once again offer a relevant word to a hungry world! 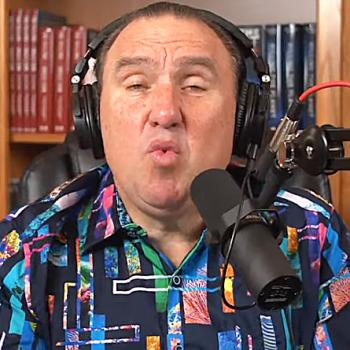 Pagan & Shinto News: New Dinosaur Discovered In Japan Named After Shinto God
Megan Manson
Get Patheos Newsletters
Get the latest from Patheos by signing up for our newsletters. Try our 3 most popular, or select from our huge collection of unique and thought-provoking newsletters.
From time to time you will also receive Special Offers from our partners that help us make this content free for you. You can opt out of these offers at any time.
see our full list of newsletters
Editor's picks See all columnists