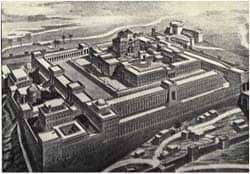 The parsha (weekly Torah portion) for the week ending August 7 is Re'eh. Re'eh means "see" and it is the first word in the portion. Be sure to check out the video at the end of this article!

At the start of this parsha, Moses says to the Israelites, "See, before you I place a blessing and a curse." The ultimate choice. Obey G-d's laws and be blessed. Decide not to obey and/or turn to other gods, and be cursed. It seems so simple and straightforward. Then Moses tells them that when they enter Israel, they are to proclaim the blessings at Mount Gerizim and the curses at Mount Ebal. This is what we call the freedom of choice. Just a short time later, in Deuteronomy 30:15, the Torah says:

"See, I have set before you life and goodness, and death and evil . . .  And you shall choose life." Well, that isn't quite free choice, now is it? To complicate things further, Maimonides says, "If G-d were to decree that a person be righteous or wicked; or if there were to exist something in the very essence of a person's nature which would compel him toward a specific path, a specific conviction, a specific character trait or a specific deed . . . how could G-d command us through the prophets 'do this' and 'do not do that' . . . ? What place would the entire Torah have? And by what measure of justice would G-d punish the wicked and reward the righteous . . . ?"

Clearly we are not the first people to be plagued with these questions. Can one honestly choose the curse? Would G-d allow us to do that? Or would G-d deliver a Marx Brothers worthy smack on the head and push us to the right path?

It doesn't have an answer that we can provide, nor is it rhetorical is the purest sense of the word. We aren't asserting or denying a fact here; it is just an enigma, one we either choose to leave to G-d or to own devices.

The rest of the parsha is a little less esoteric. Moses tells the people that their first job in Israel is to destroy all the ritual sites in the land, to wipe out all traces and images of the false gods they worshiped. No repurposing here. All the worship places must be destroyed and the Israelites were to let G-d choose the location of their worship, tithes, offerings, and all manner of sacrifices that G-d taught us about during the long trek to this promised land, almost as if it was all a dress rehearsal for this new homeland.

Yet again, Moses warns the people against false idols and worship. As if the Baal-Peor incident wasn't a strong enough deterrent, he hammers it home that G-d "detests" this behavior, especially the ritual of offering up live children as sacrifices through fire to their gods. One place in Israel that this happened often was a location called Gehenom. It is the term we use for hell. You can visit this location to this day. (Note: In fact, back in 1971 when my father was there, it snowed for the first time in a long time. He was thrilled to be there when "hell froze over.")

Moses is very serious about this idol worship. He even goes so far as to say that even if a prophet comes to you and says your G-d told me that you should worship these other gods, do not believe him. And what if someone fell prey to this type of worship? They were to show no mercy, no matter if it were a brother or son, daughter or wife. They were to be stoned. Additionally, Moses tells the Israelites that they were not to cut themselves or shave their heads because of the dead. It's an odd prohibition, but keep reading for my drash (commentary as to why).

Next, Moses goes into some detail about Kashrut, our governing dietary laws. Here, in Deuteronomy 14:3-21, he details some cans and cannots.

Ox, sheep, goat, deer, gazelle, roebuck, wild goat, ibex, antelope, mountain sheep, and any other animal that has "true" hooves (meaning a cleft, a split hoof) and chews its cud (meaning, like a cow it chews the food and swallows, then brings it up and does it again).