Camel, hare, daman, pig, or anything that doesn't chew its cud or have a split hoof. Some of these animals are tricksters, like the pig, which has a cloven hoof but doesn't chew its cud. Though it presents itself as a Kosher animal, on the inside he is lying. For that reason, and not just because it is not clean, the pig is not valued very highly in Judaism. And for the record, we aren't even to touch their carcasses (so I was totally valid when I didn't want to dissect the pig in 7th grade . . .)

Only fish with fins and scales.

No winged, swarming things (not my language . . . but I'm okay with it. Who wants to eat swarming things?), nothing that died a natural death, and lastly, an oddly worded prohibition, you cannot boil a kid in its mother's milk. 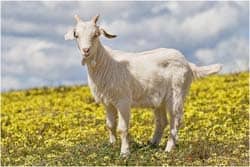 What? Okay first off, this kid is a baby goat but even so, with all this other language . . . why such a specific prohibition? One rabbi I spoke to said, "Well, it's just tacky" and frankly I am inclined to agree. However, I spoke to Reb Zalman Schachter-Shalomi with the other rabbi about this line in the text. He taught us that way back in the "day" this was a delicacy. They would actually use the baby goat's mother's milk to seethe the kid. It was done as a pagan festival for the high priest in preparation for an equinox event where . . . well, to keep this G-rated, he would participate in "adult" activities with the female priestess. So this line in Deuteronomy 14:21 is where our prohibition against mixing meat and dairy comes from.

Earlier I mentioned that I would give you my drash on these odd prohibitions. So here's the thing. The Torah mentions a lot of specific actions like shaving your head when someone dies or cooking a kid in its mother's milk. Why be so specific? Why not say, don't mourn too much or mix dairy and meat in a meal? Because G-d doesn't have anything against these actions. G-d was merely creating a separation, a line, a visible difference between the Jews and the other people out there that were not praying to, following, and otherwise involved with Hashem, G-d. It is a way to be separate from the other people. It is a visible and constant reminder that we are just a bit different and for Jews, they are touchstones to their Judaism. Reminders of who we are. Every time I sit down to a meal, I have to think. Not think about what looks good. Not think "Oh, I had chicken for lunch so pork sounds good tonight." I have to be mindful of every bite I put in my mouth, every sip of liquid and as if that isn't enough, there are the blessings to be said.

You want to know what kashrut, kosher is? Me being me and not you. Jews being Jews and not Christians or Pagans or Hindus. Nothing wrong with being anything else, but this is our cultural heritage.

The portion goes on to discuss tithing, not of money necessarily (unless you lived too far), rather to get together in G-d's presence and connect. It was a feast, not to make any one group or person rich. Additionally, there was a provision for the Kohen and Levite as well as the stranger, the widow, and the orphan. In the third year, the people would bring the tithe but instead of feasting, it would be for these others.

The Sabbatical was very important in Judaism. The seventh year held a lot of responsibility. Debts were forgiven between Israelites but there were rules around this to protect both the lender and borrower. Also, if an Israelite was sold into slavery, they only had to serve for six years and in the seventh they were set free. Not only set free but the master was to give gifts to the slave. However, the slave could decide that they don't want to be freed. At that point the master would pierce the slave's ear to the doorframe with an awl and the slave would be his for perpetuity. This is why some Jews object to ear piercing, as it was a sign of a forever slave.

And finally, the pilgrimage festivals are the last section of this parsha. Now that we were no longer nomadic, there were three times a year that we were to make a pilgrimage to appear before G-d. It is not mentioned yet (as it hasn't been built) but they would all go to the Holy Temple, once it's built. These three are Passover, Shavuot, and Sukkot. These are actually the only true festivals in Judaism, which is reflected in the greetings given.  (See the Jewish holiday greetings here.)