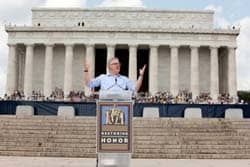 As we approach the ninth anniversary of the terrorist attacks on Washington, D.C. and New York City, as we absorb the news that combat in Iraq is ending, at a time when some politicians and pundits condemn the building of an Islamic community center in lower Manhattan, and in a season when broadcaster Glenn Beck proclaims a new March on Washington and speaks from the same Lincoln Memorial stairs as Martin Luther King, Jr. on the anniversary of the latter's "I Have a Dream" speech, it seems that it's an appropriate time to stop and reflect. Lots of things are in the air, lots of dissatisfaction, lots of fear. Christopher Hitchens, writing about Beck's recent rally, noted "the two main fears of the old majority: that it will be submerged by an influx from beyond the borders and that it will be challenged in its traditional ways and faiths by an alien and largely Third World religion." 9/11 has created (or increased) worries about border control, Islam, foreign affairs, domestic freedoms, and so I think it important that we pause, take a breath, take stock.

The anniversary of 9/11 would be sufficient reason for reflection; in my faith tradition we live by a liturgical calendar on which we mark feast days and remembrances of those who have come before and shaped the way we live and believe. But with all these political and geo-political events (and others) that seem to be linked to 9/11 in the news, it's an especially meaningful anniversary, and a time to consider the political and spiritual arenas and see what we might learn.

When Time asked on a recent cover if people in the United States had a negative reaction to Islam, they went on to answer their own question: Yes. Assuredly. The dust-up over the "Ground Zero Mosque" has revealed that our understandings of the 9/11 attacks and the wars in Iraq and Afghanistan where we have fought against radical Muslims have calcified American attitudes into anger at and indignation toward Islam. While Time's poll suggested that many Americans don't even know a Muslim, it also suggests that many Americans do not care to. In this (and, it seems, in every case where people see others as Other or alien) they assume the worst.

A case in point: some good Christian Americans heard that the Six Flags amusement park chain would celebrate the end of the Islamic holy season of Ramadan by sponsoring "Muslim Family Day" at the parks on September 12, 2010. Some Tea Partiers assumed the selection of this date was a slap in the face because of its proximity to the anniversary of 9/11. They fumed on discussion boards and went public to condemn this travesty. They threatened a national boycott of the Six Flags parks: "STOP THE SILENCE. STOP THE NONSENCE. [sic] STOP THE MUSLIM DAY -- THEY ARE NOT AMERICANS. THEY DO NOT ABIDE BY OUR CONSTITUTION -- THEY ARE NOT ONE OF US -- YOU ARE EITHER WITH US OR AGAINST US -- MAKE YOUR DECISION."

Assuming the worst, they made accusations that the choice of this date was an example of Muslim extremists spitting on the memory of the 9/11 dead. What perhaps the protestors did not know is that the Muslim Family Day was not some new outrage; it had been celebrated at Six Flags for a decade. What perhaps they had not heard was that one of the Muslim organizers of the first event in 2000 was actually killed in the World Trade Center bombings in 2001; Muslims, Jews, Christians, and members of other faiths all lost their lives to the terrorists. What perhaps they were not aware of was that in 2010, Ramadan ended on September 9, but in deference to those who had lost loved ones on 9/11, they had moved their celebration back two additional days, to September 12. And what they certainly did not seem to know is that the Muslim organization sponsoring the event, the Islamic Circle of North America, is not a terrorist front, as some Tea Partiers charged, but a grass roots organization attempting to teach about the roots of Islamic faith within a religiously diverse society, and headed by Muhammad Yunus, a Nobel Peace Prize laureate.

Many Christians are on record opposing both this Muslim Family Day and the construction of the Islamic center near the site of the World Trace Center collapse. While I sympathize with anyone who personally suffered loss on 9/11, I also believe we cannot allow fear and anger to reshape us into the image of our foe. Leaving aside for a moment the Christian ethical response, I note that the founding documents of America pronounce that we believe in freedom of religion, freedom of assembly, and freedom of speech; to say we believe in these things only for those who act as we do, worship as we do, and live as we do is to completely negate the radical nature of the freedoms they promise.