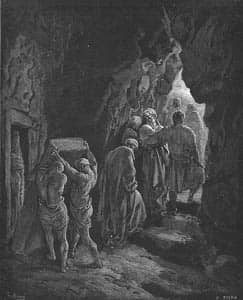 The parsha (weekly Torah portion) for this week is Chayei Sarah. Chayei Sarah means ‘the life of Sarah,’ and they are the first distinctive words in the portion. Be sure to check out the video at the end of this article!

I am sure you can guess what this parsha is about just from the title. This one seems easy, right? Well, if you were going to say, “Clearly, Talia, it is about the life of Sarah, Abraham’s wife . . .” you would be wrong. At least wrong if you look at this Torah portion on a purely p’shat (basic, obvious) level.

The very first two verses of the parsha tells us that Sarah died at 127 years old in Kirat Arba and Abraham mourned her. There goes that theory. Nothing in Torah is a mistake or fluke or even a coincidence. Some rabbis say that this parsha is called the life of Sarah because “the righteous are called living even after death while the wicked are called dead even in life.” Okay, good option but not totally satisfying. She is our righteous foremother, that’s true. Another explanation for this is because we see, in this parsha, the child of her old age completing a significant lifecycle event, which is especially important after his near sacrifice in the last parsha. Additionally, we see a continuation of Sarah within Rivka (Rebecca), Yitzhak (Isaac)’s wife, as a strong mother to our nation.

Remember when I mentioned that there aren’t any accidents in Torah? Well, Sarah’s age is written in the Hebrew as one hundred years and twenty years and seven years. Why would this be? Clearly that makes 127 however, Rashi (a great scholar of the Tanach) tells us:

So now Abe has to find a nice resting place for his beloved. He goes to speak to a friend, Ephron (a Hittite), and asked to purchase the Machpelah Cave. Machpelah literally means double. Ephron says, “Sure Abe! Go ahead and just take it. No charge.” But Abraham wasn’t biting. He said, “Look, I want to buy it from you, please!” Ephron replies, “Friend, the cave is worth 400 shekels of silver but please go ahead and bury your dead, no charge.” But Abraham was wise to this game. Ephron had named an astronomically high price and in a solid currency. Silver shekels were like the euro or the dollar (before the recent nosedive); this was the currency to have! Abraham knew what was going on. He paid the money without haggling.

Why would he do this? The same reason we read earlier in the year -- land given can just as easily be taken. Abraham wanted to ensure that this land would stay ‘in the family,’ so to speak, forever. He held the deed; it was his. Interestingly, the Torah only explicitly records three land purchases: the Machpelah Cave, the Temple Mount by David, and Mount Moriah. What is fascinating about these three places is that these are spots that are hotly disputed in current Israeli/Palestinian politics. Machpelah is in Hevron; the Temple Mount is where the Dome of the Rock and al-Aqsa Mosque stand; and Mount Moriah is near Nablus. According to the Torah, we have those bills of sale.

Back to the parsha. So Abraham buries his beloved Sarah and in his ‘old’ age, decided that Isaac needs a wife. He calls his servant, Eliezer, to him and has him undertake a mission to find Isaac a wife. There are a few troubling or interesting ideas here. First, Abe has his servant put his hand on his thigh. Why? Well, pre-Sinai, pre-Torah and our sanctification as a people, objects didn’t hold any holiness after use. The only thing that held holiness was the one mitzvah that G-d commanded Abraham to do: circumcision. So yes, while the Torah is trying to be polite here, our sages tell us that the servant swore on . . . you guessed it, his penis. Here’s another question, why can’t Isaac find his own wife? Well, here we have a logistical issue. Isaac has to marry someone from his father’s hometown, a relative. However, they don’t live in Canaan. Isaac can’t leave Canaan because he has just been used as a sacrifice to G-d; even though it was not complete he is still considered as such. Anything that is offered up as a sacrifice to G-d cannot leave the land. So he’s stuck. The girl must come to him. In fact, take a look . . . Isaac is the only patriarch that never leaves the borders of what will become Israel.