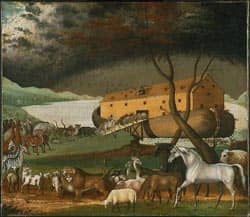 The parsha (weekly Torah portion) for this week is Noach. Noach is a proper noun, a name, and means comfort or rest and it is the third word (but first distinctive word) in the portion. Be sure to check out the video at the end of this article!

Noah’s (or Noach) ark is one of the most talked about portions of the Torah. I don’t know if that is because it comes with such cute props (animals and a boat) or because of the moral of the story but my gut reaction is that it has a lot to do with props. I mean, how can you gift a child with Cain and Abel or Joseph and his two wives . . . much easier to play with a boat and animals.

But this parsha isn’t only about Noah, that is only about half of it. So let’s dig in . . . Noah is a normal guy, a good guy, who helps his fellow man, follows the rules, and has three good kids. Except, the world wasn’t all that good at this time. There were too many bad people and G-d decided that it was time for a change. So G-d spoke to Moses and delivered some blueprints. G-d’s instructions for the ark are pretty explicit. It has to be of gopher wood and covered in pitch (to make it watertight) and it has to be 300 cubits by 50 cubits. On and on G-d goes about his instruction. Now let’s talk animals, contrary to popular belief, there wasn’t only one male and one female of all the animals. Can you imagine the pressure to produce for those animals?! Chapter 7 verse 2 tells us there were seven pairs of the kosher animals and one pair of each of the non-kosher animals. These guys were loaded aboard and Noah put his family, including his sons and their wives, on board the ship.

You should know that at this point, Noah’s neighbors think he is certifiably insane. Come on, this is puttering around the house taken just too far. Building an ‘ark’? Whoa. But Noah kept on building. He got the ark finished, the animals loaded, and it starts to rain. And rain. And rain. Finally the whole family is on board and the rain never stops. Suddenly, Noah doesn’t look so crazy anymore. G-d floods the earth for forty days. Once the rain stops and the waters begin to recede, Noah sends out a raven to see if there is land. The raven never comes back. That is a pretty good indication that at least the trees are no longer underwater because if the raven didn’t have a place to land, he would have come back. Finally, Noah sends out a dove and the dove comes back with an olive branch in its mouth telling Noah and his family that there must be dry land out there somewhere. Noah checks for himself and sees the dry land and they get so excited. Can you imagine being cooped up on a ship with a bunch of animals and your in-laws? They find a place to disembark and let the animals out, but not before Noah held back a sacrifice of each clean/kosher animal. G-d seemed pretty happy about this and the future of the world.

The kids and Noah were blessed with fertility and G-d made them a promise that G-d would never send a flood again. And in G-d’s classy way, G-d sent a rainbow to seal the deal.

But all is not rainbows in Noah’s story. G-d told him to plant a vineyard and he did. He reaped many grapes and created wine, with which he proceeded to get drunk and get naked. This is where the portion gets a bit metaphorical. It says his son Ham saw him naked. What does that mean? Did he walk in on his dad doing the pants-off dance-off? Not exactly, it is never quite that simple. Suffice to say this, there is a disagreement between our sages in Sanhedrin 70a (a tractate of the Talmud about law) that either Ham castrated his father or committed sodomy. Ham’s brothers come to help cover up their father. After he slept it off, Noah woke up incredibly angry with Ham so he cursed Ham’s son, Canaan, to be a slave to his uncles. However, Shem and Japeth (Noah’s other two sons) were blessed at the same time.

Chapter 10 goes on to speak about Noah’s descendants and their achievements. In chapter 11 we have the story of the Tower of Babel. At this time, we were all one people who spoke one language. Some citizens decided to build a tower and a city so that we can all stay right here. As they began building, G-d took note. This was not how the world was going to work and so some action had to be taken. G-d confused their languages, giving them all something else to speak, and then scattered the people throughout the world. Clearly, that was the end of the city Babel.