The Eternal Shrug of Rome 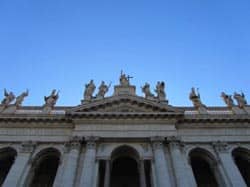 It takes a traveler mere minutes in Rome to understand why she is called the "Eternal City." Speeding from the airport, the dome of St. Peter's Basilica suddenly looms from beyond the Vatican walls and time seems to turn in on itself. Insta-communications and all the glories of the present age become as passing fancies—the grass that withers and fades. To watch the sun rise over domes and spires and to consider the mostly-anonymous human beings who labored to produce them, is to feel keenly one's own smallness and mortality, and to make peace with both.

Rome's recklessness is utterly at odds with the precision of her architecture. Drivers chatter amiably, turning to gesture at their passengers even as they are merging into traffic while sending a text-message and answering a dispatch. Pedestrians, cars, buses, and trucks seem engaged in an endless game of "Frogger," one where drivers affect a grudging respect for those who dare to step off a curb beyond the crosswalk, and pedestrians tempt fate, and it is all of a piece; in an eternity-minded city, everything boils down to a shrug. Danger, like a day, is a state of mind.

In a piazza, by an ancient fountain spouting cool, fresh water delivered by even more ancient aquifers, a demonstration is taking place. Communists are waving flags; the Hammer and Sickle abound along with the world-ubiquitous Che shirts and a few random Castro caps.

Amid the mod socialists, less politically-minded Romans observe the gathering from the shady comfort of a cafe awning; they drink frothy coffee and when asked what the Communists are demanding, they smile and shrug. "What does every crowd demand? Attention; a little money so they can do better propaganda; the illusion of meaning!"

Tomorrow, there will be another demonstration, led by others looking for attention and drawing small, vague crowds, and Rome will observe them with a shrug and, unimpressed, turn its attention elsewhere. Movements come and they go, they are barely a blip in eternity, no more than a watch in the night, as consequential to Romans, and to time, as the ashes that fall from their lazily burning cigarettes.

The day begins with the pealing of a hundred church bells. They call to rise, call to prayer, they ring in the background of a noisy daily bustle, a constant back-and-forth of reassurances reminiscent of the Harmoniums of Vonnegut's Sirens of Titans; they call "I am here, I am here," and respond "So glad you are, so glad you are!" And all about, the Romans walk or ride, or zoom by like swarming wasps in their appropriately-named Vespas, eating gelato within yards of an incorruptible saint, carrying a bag of bread and wine in to Vespers.

When your daily life is an encounter with nearly everything that has come before you, you develop an appreciation for what is important, and what is not, what is passing and what will last, and how quickly time marches forth and away from even the greatest of artists, the holiest of men, the loftiest of ideals. To be a Roman is to remain unswayed by tempers and trends, because all of them fade into the shadows of temples and time.

There is greatness in that understanding, a breadth of wisdom born within these narrow avenues; Rome watches history, makes history, shrugs at history because Rome lives surrounded by the entirety of time; she is grateful for and comfortable with mystery.

Tomorrow a pope speaks to a hundred thousand souls and that is as usual and normal as a plate of pasta with garlic, or a magnificently inlaid marble tomb; everything is made remarkable by its sheer everyday ordinariness, and that is why Rome can shrug and tell you to sit down and watch the world go by, without a fret or worry. She is a queen bee, reigning within precise dimensions of an improbably serene hive, because she does not fear the constant buzz of ages; they only portend an eventual and inevitable sweetness.

Rome trusts in the promise of sweetness, she comprehends the purpose of the buzz, and that is why she can shrug. There is a sound theology to all of it, one that says "all things work to the glory of God, whose thinking is not your thinking, and whose ways are not your way."