Why Are ER Waits So Long?

Editor's Note: The following is an edited transcript of the first podcast in the Veritas Riff series. For more information on the series, and for other installments in the series, go to veritasriff.org. 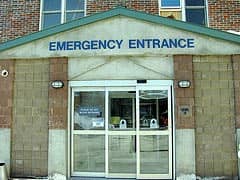 The Veritas Riff is a group of friends who combine deep faith with world-class expertise in subjects ranging from politics, science, culture, business, medicine, and more. They offer their informal take on the big questions facing us all. The host of the Veritas Riff is Curtis Chang.

We as individuals have varied experiences of medical care, except one: we will almost certainly find ourselves someday (if we have not already) in an emergency room for ourselves or for a loved one. The situation, almost by definition, will be a crisis. For most of us, the emergency room will be one of the most defining features of an unforgettable chapter of our lives.

In order to understand this crucial aspect of health care, I'm speaking with Renee Hsia, a professor of emergency room medicine at the University of California, San Francisco, and a leading expert on how the public experiences emergency rooms. She is also a practicing ER doctor herself at San Francisco General.

Renee, on average, what kind of wait should I expect before I can be seen at the emergency room?

It depends on where you're going—whether or not, for example, it's an urban hospital—and what type of problem you present with. But your wait can range anywhere from being seen right away, which is rare, to up to eight or even twelve hours. At the University of Southern California, in Los Angeles County, people often wait twelve hours to be seen for something of low acuity, such as a sore throat.

Twelve hours sounds excessive. Have waits always been so long?

No. The average length of stay, a decade ago, was closer to an hour or an hour and a half.

Many of us may not realize that there has been such a change. The obvious question is: Why has this happened? We hear a lot about poor people using ER rooms for primary care visits. Is that why the ER waits are so long?

It is indeed true that many people who are uninsured, or poorly insured, cannot have primary care doctors because primary doctors refuse to see them due to low reimbursement rates. So they may go to the emergency room. But that actually comprises probably less than 10 percent of the visits to the ER.

So if poor people using emergency rooms in place of primary care doctors only accounts for a small part of the problem, what accounts for the rest?

The real reason is supply. We have to consider not only increased demand, but how many doctors are out there to serve the growing number of patients. In the mid-1990s there were about 4,500 emergency rooms in the United States. Now there are 3,900. So if the number of patients is growing, along with population growth, and emergency rooms are closing, then we're going to have overcrowding.

Why are emergency rooms closing when we actually need more of them?

One of the main reasons why hospitals close, or why emergency departments close, is because they can't pay for themselves. For instance, Stanford, where I trained for residency, is in an area with many affluent people, most with good insurance. So the emergency room at Stanford is what we would call a revenue center. Most people admitted to the hospital come through the emergency room with insurance, and they keep the hospital afloat.

In a place like San Francisco, there may be many homeless people without insurance. Yet because there's a federal mandate that emergency departments must see patients regardless of their ability to pay, you have to take those patients.

And of course we want to take those patients, but the problem it presents is unique in health care. Call a cardiologist to request an appointment, and one of their first questions will be, "What insurance do you have?" They're able to say no. Emergency medicine is the only specialty where we're required to see all patients. This is what's called an unfunded mandate. Emergency rooms in such areas are not revenue centers but cost centers, and they make it more difficult for hospitals to stay afloat. So those hospitals will close more often, or they'll close their emergency rooms.

The nature of unfunded mandates in medicine brings to mind a recent experience. My wife and I were struggling to get our daughter to keep her room organized. We would mandate that she put her things away, but we hadn't created proper spaces or an organizing system that would allow her to do those things. We just told her she had to take care of it. So she just kept shoving more things into her closet. It just resulted in a massively unorganized closet and a worse mess. It seems medical care, when it comes to poor people, is rather similar. Everyone is trying to shove them away in the corner, and it just makes a mess.