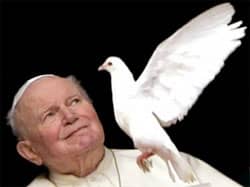 The beatification of Pope John Paul II on May 1 should bring lots of TV cameras to St. Peter's Square. That's only right, for if there ever was a pope made for television it was John Paul II.

Trained as an actor in his youth, John Paul II was comfortable on any stage, including the world's. He made almost 130 trips to far and near corners of the earth and greeted all strata of society. Wherever he went, he brought with him a media entourage which otherwise might never have focused on the desperately poor in African and Latin American countries and in India, nor covered his message to remember the poor amidst us.

The pope knew that journalists, especially TV cameramen, gave him entrée into millions of homes. In a visit to one nation, for instance, the pope deplaned to a waiting crowd. The crowd stood on the left cheering and waving, and the pope responded. Then he turned to the lone cameraman on the right and waved just as enthusiastically to an unseen crowd of perhaps millions more. John Paul welcomed media, for he knew their power in preaching to the modern world.

Elected when he was 58, he was a vigorous, handsome man with a message, who became a natural fit to the cover of news magazines. In 1994, he was Time magazine's "Man of the Year." He was made for photo ops, whether hugging a child in Angola or holding a koala in Brisbane, Australia. He wore native dress, including a unique straw hat in Lesotho, delighting both the local people and the paparazzi.

Yet his respect for modern media went far deeper than photo savvy.

Even before the current social media took root, Pope John Paul recognized media's impact on society. In his 1990 encyclical, Redemptoris Missio, he compared the world of media to the Apostle Paul's Areopagus in Athens, where the Apostle to the Gentiles, the pope said, "proclaimed the Gospel in language appropriate to and understandable in those surroundings" (cf. Acts 17:22-31).

At that time the Areopagus represented the cultural center of the learned people of Athens, and today it can be taken as a symbol of the new sectors in which the Gospel must be proclaimed.

The first Areopagus of the modern age is the world of communications, which is unifying humanity and turning it into what is known as a 'global village' . . .The means of social communication have become so important as to be for many the chief means of information and education, of guidance and inspiration in their behavior as individuals, families and within society at large. In particular, the younger generation is growing up in a world conditioned by the mass media.

The pope saw media's importance beyond their ability to deliver a message in a moment. He said that the modern medium is "not meant merely to strengthen the preaching of the Gospel."

There is a deeper reality involved here . . . Since the very evangelization of modern culture depends to a great extent on the influence of the media, it is not enough to use the media simply to spread the Christian message and the Church's authentic teaching.

It is also necessary to integrate that message into the 'new culture' created by modern communications. This is a complex issue, since the 'new culture' originates not just from whatever content is eventually expressed, but from the very fact that there exist new ways of communicating, with new languages, new techniques and a new psychology.

Pope John Paul II saw how the media was an integral part of a changing world. He embraced modern media and they, in return, embraced him.