Shouting Stones: The Centurion at the Cross

This is one in a series of Lenten reflections on the men and women who became the "shouting stones" for Jesus on his way to the Cross. How do the actions of these everyday folk invite us in our Lenten journeys? In this reflection, the Rev. Lisa Hess considers the centurion who spoke out as Jesus uttered his last words on the Cross. 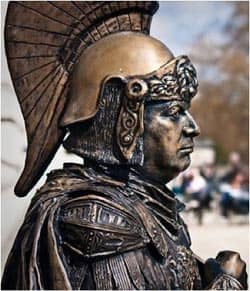 The "Inside-Outsider" Centurion
Mark 15:39
Mark's centurion was an inside-outsider. "Truly this man was God's Son!" he proclaimed. But who was this centurion? What drove him? What might his words mean to us today?

A centurion makes an appearance several places in the Christian scriptures, the two best-known references being the Capernaum healing of a servant in Matthew or Luke and the proclamation exclaimed at the foot of the cross in Mark. A centurion shows up in Acts to urge Paul and others to jump overboard so they could be saved from a storm and sure shipwreck. Another source, the Gospel of Peter, has a centurion asleep at Jesus' tomb on Easter morning. We have little detail about the centurion in Mark, except for extra-scriptural presuppositions and the internal narrative of the Markan gospel. It's safe to say, however, that the centurion's sociopolitical authority in Roman-governed Jerusalem and his utter periphery to Jesus' community and narrative shaped him as an inside-outsider. He had substantial authority within Roman society and therefore had little in common with a failing cohort of Jewish disciples whose teacher was dying. The centurion's words therefore come to us today from the place of boundaries, limits, the in-between. He was with Jesus in the end, but outside of Jewish voice.

Standing at this line sways his proclamation for our ears today, perhaps toward irony, or perhaps toward faith. As an outsider, he could be mocking Jesus and his followers, laughing at the pretensions of Jesus becoming a figure like a Roman ruler, a "son of God." His tone could be dismissive and ironic. "Truly this man was God's Son!" (roll of the eyes). Or, the centurion's words could testify to the faith of an insider, someone who invested devotion who was now awestruck and grieving at the death of his Lord. Even as he stood on the outside in the societal eyes of those around him, his tone could have been sad, sharing in an utter and ignoble loss. How do we know?

Of course we don't know, and we cannot.

But what a marvelous, Markan choice of voice, attesting to the incongruity of a rabbi-become-Lord. The sense of it depends upon where you stand and how you weather the line of limits, of boundaries imposed or assumed. For early readers of Mark, a centurion's genuine proclamation of faith could be more de-stabilizing of social assurances than the more expected mockery. From one definition of inside, an outsider's faith can be threatening. It could signal corruption of a group's purity to be valued by those with power, such as a Roman centurion. Some would immediately suspect motivations and distrust such a confession of faith.

If inside refers to those with sociopolitical power, however, then such an insider who attests to the divine authority of an outsider like Jesus faces great risk to say something ostensibly foolish, even destructive of his assets and standing. At this indeterminate inside-outsider line, the centurion could threaten or challenge those powered insiders, like he was. He could claim insider credit within Jesus' fellows, standing at the foot of the cross. Especially when most disciples had left, he could share in the intimacy of grief with those family and friends who stayed to the end.

What we do today at this line demonstrates how we hear the centurion's words in Mark. Do we yearn to be an insider in power or in prophetic belonging that will be crushed by those in power? Do we practice any forbearance to remain at the line, or do we succumb to the forced choice: to be in, or be out?

The classic Christian moralist, C.S. Lewis, names this human 'insider' drive "one of the great permanent mainsprings of human action" (Lewis, C.S. "The Inner Ring," in The Weight of Glory and Other Addresses, Wm B. Eerdmans, 1949). The seemingly insatiable (and perhaps ugly) desire to belong to such circles is his particular interest, both for its fundamental shaping of human lives and its potential to create anguish, suffering, even evil within human society. He warned the graduating class in 1944 to whom he spoke, "The quest of the Inner Ring will break your hearts unless you break it" (65).