Suffer the Little Ones 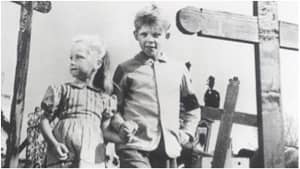 "If you value your sanity," Hollywood experts say, "don't make movies about kids."

The logistical complexity of directing children renders such conventional wisdom self-explanatory. But there is another unrecognized yet equally compelling reason for the adage: Adults are terrible at remembering what it was like to be a child.

The majority of movies about children say far more about their adult creators than their supposed subjects. Simultaneously naïve—a trait we adults often confuse with innocence—and unconvincingly sarcastic, the kids that populate most films are more like mini-adults than children; an unconvincing reflection of what we think we were like in our youth, rather than an accurate representation of reality.

The cloying-yet-cynical youngsters that mar so many cinematic offerings make those few instances where the uniqueness of childhood is accurately captured even more noteworthy. French director René Clément's Oscar-winning feature Forbidden Games (Jeux Interdits) is a particularly striking example—a film that explores the fascinating region between childlike innocence and a more self-aware, self-assured adolescence.

In the film's wrenching opening moments, young Paulette (Brigitte Fossey) loses both her parents when their convoy of refugees, fleeing Paris before the advancing Nazi invaders, falls prey to a Stuka strafing attack. Bewildered by their inexplicable absence, Paulette flees the scene, seemingly more concerned about the loss of her beloved puppy than her parents' death. As she wanders aimlessly through the French countryside, a chance encounter with a local peasant boy, Michel (Georges Poujouly), offers her an emotional lifeline, and she is taken in by the Dollés, a poor, hard-working farming family whose lives could hardly be further from Paulette's Parisian upbringing.

During her time in the Dollé household, Paulette struggles to cope with her loss—an attempt made profoundly more difficult by her parents' obvious lack of religion and the young girl's corresponding lack of any spiritual lens through which to view her life's shocking events. Here again, Michel comes to her aid, offering her the comforting, somewhat confused spirituality so unique to young children. Unsurprisingly, Paulette is drawn to the symbolism of the crucifix—"You've never seen him?" "Yes, but I never knew who he was"—and the two set out on a peculiar mission: gathering up the villages crosses to use in their newly-christened animal cemetery, whose first occupant is Paulette's pet dog, Jock.

Their unusual actions, misunderstood by the local villagers, add fuel to an ongoing feud between the Dollés and their neighbors, the Gouards, and accusations begin to fly with ever-increasing viciousness. When the children "borrow" the cross from the grave of a recently-deceased Dollé, tensions reach a boiling point, culminating in an absurd brawl through the village graveyard. With the help of a local priest, Michel is identified as the culprit, but the arrival of the local gendarmes as they search for Paulette throws everyone into disarray. In a desperate attempt to keep his young friend with him, Michel reveals the location of the lost crosses, but to no avail. Paulette's future lies elsewhere.

Despite its undeniably sober subject matter, the film is far from hopeless. The antics of the Dollés and their neighboring rivals provide some welcome (and necessary) hilarity, and the children's actions are so clearly motivated by innocence and a genuine desire to do good that they lend a gently ethereal quality to an often tragic story. While the film's final moments leave Paulette's future more open-ended than perhaps some would like, her time in the country has given her something she desperately needs: a framework with which she can begin to understand her parents' death.

Raised without the religious scaffold upon which so many of us rely when confronted with suffering, Paulette instinctively recognizes that the explanation for her life's turmoil must lie elsewhere. Her instant acceptance of Michel's incomplete account and her obstinate insistence on the cross as the emotional and intellectual linchpin to her future are heartbreaking—yet they are also hopeful. The seeds planted by Michel's beliefs (and by his kindness and genuine concern) will grow into something far greater than either of them could imagine. As Paulette grows older, the ability to comprehend the suffering that pervades her life will grow along with her.

At its heart, Clément's film reminds us of two very important facts: first, the extraordinary resiliency of the childlike heart. Despite Paulette's deeply traumatic experiences, her ability to cope with the tragedy—emotionally, at least—is almost unbelievable, yet deeply true to life. In many ways, childhood is the most defenseless of human stages. Yet in His wisdom, God has given children an extraordinarily irrepressible nature, and their ability to weather such storms as war and the loss of those most vital to one's growth, scathed yet unbowed, has been essential to our very survival.

But perhaps the deeper truth on display in Forbidden Games is humanity's innate need for an explanation of tragedy that rises above our human understanding. From our earliest days, we grapple with the problem of suffering, and while the questionings of a child may be more emotional than intellectual, the desire for understanding is as powerful in youth as in adulthood.

The Grand Inquisitor's stentorian critique of the Divine—"Why do innocent children suffer?"—is not an adult concern; it is a human one.

How appropriate that a film that finally "gets children right" should remind us of that fact.