The Reduction of Desire 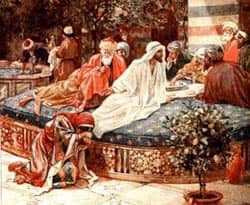 In God at the Ritz, Monsignor Lorenzo Albacete, priest, theologian, and former physicist, shares a personal story about the spiritual peril that he calls "the reduction of desire."

A student was driving him to a university building, a residence for priests, where he was to spend the night. They arrived and he spotted a parking space in front of the residence with a sign "Reserved for Residents," which to his mind meant priest residents, however temporary. "Ah, parking right up front," he observed. But to his surprise and consternation, she drove right by and proceeded to a public parking lot that seemed to a person of his bulk to be several miles away!

Clearly the distance was not a problem for her—she was thin and small and could easily cover that distance—but it was for me.

Monsignor Albacete acknowledged that his argument might have stretched the point.

But what shocked me was that she wasn't even attracted by it! She had no desire to park nearby. I told her, "You suffer from the reduction of desire." Now my desire to park up front would be so great that I would look for the smallest justification in order to be able to do that. But she didn't even struggle with this. She didn't mind going miles away to park in the student lot.

My driver's response to the parking situation is emblematic to me of the problem of the reduction of desire. She didn't park up front because the educational system, with its laws and punishments for breaking the law, had drilled into her that she should accept her spot as a student and not have ambition that might be beyond her rightful place in society. That is how power remains in power—by reducing our desire.

I find this story fascinating, not least of all because I so related to that rule-following driver. My Pharisaic desire to get good spiritual marks would have led me to follow the parking sign to the letter. My Calvinistic streak would have primly thought: Well, you should just exercise more, Father. [Disclaimer: I have had the great honor of meeting Msgr. Albacete and, probably like everyone else who comes in contact with this holy, very funny man, instantly warmed to him.]

In many ways I have thrown off my chains but part of me is also still in third grade: afraid of "getting yelled at" and wanting to stay in good graces with the powers-that-be. To want to stay in people's good graces isn't necessarily a bad thing. But it becomes a bad thing if we're led to do violence to our convictions, ourselves, and others. It becomes a bad thing if we're thereby led to reduce Christ to a social worker or a cop or a politician.

Contemporary Church life threatens to fragment into extremes of "liberal" and "conservative" precisely because often we lose sight of this deepest mystical Center and spend ourselves in fruitless debates that are unworthy of the Church because they are really political and not mystical in method, content or intent.

In a period of intense emotional pain, I once asked a friend to go to Mass with me at the cathedral in downtown L.A. and she refused, as a matter of conscience, because she felt the money should have been spent on "the poor" instead of on a fancy church. Now I realize no one is obligated to do anything they don't darn well please, and that my friend had every right to say no. But I wanted to say: You think I'm not one of the poor? You think you're not one of the poor? You don't burn for the Eucharist, for Mass? Who cares how much or how little the church cost?

Of course I'm always in danger of the reduction of my own desire. I'm ever more aware of the myriad times, every day, that I'm a terrible Pharisee. But more and more I also see that my greatest grace is that for someone of my demographic and education, I am, and have always been, and am poised to pretty much always be "poor.

" Poor in spirit as a perpetually restless, irritable, discontent alcoholic (and that's sober!), poor in worldly goods, poor in companionship. But to be poor is to burn with love for Christ. To be poor is to be ever more well situated to "will the one thing," which Kierkegaard observed is the mark of the saint.