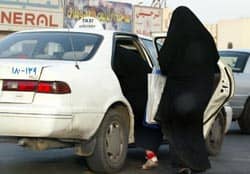 This morning, as usual, after sending the older two kids off to school on their busses, I finished feeding my 3-year-old, put on my headscarf, strapped my son into our car, and drove to his preschool. After I dropped him off, I drove myself to work. On my lunch break, I drove back to preschool and picked up my son and brought him home to his grandparents, grabbed some lunch, drove back to work. Later that evening, I drove home, stopping by the grocery store to pick up a few things on the way.

What's so extraordinary about this? Nothing, really. I drove like I normally do. And I have been driving for many years now, obtaining my license as soon as I hit that magical age of 16. Driving is something I take for granted here in the U.S. But if you are a woman in Saudi Arabia, you might as well forget about driving, since for many years the Saudi government has forbidden females from getting behind the wheel. And if there is one symbol that feminists or basically anyone with a beef against Islam's treatment of women point to, it's the Kingdom's "rule" on no women drivers.

And it's a shame, really, that this rule (which I find rather ridiculous in light of many other things women can and are encouraged to do in Saudi Arabia, like pursue education and work outside of the home) often becomes the red flag for critics to say, "Women are inferior in Islam."

I call it a rule, rather than a law, because there actually is no official law or ban on women driving in Saudi Arabia. But other laws effectively make it impossible for women to drive, as citizens must use locally-issued licenses, which are not issued to women.

Many Saudi women have chafed at this for years, and last week, one woman took matters into her own hands and defied the ban by getting behind the wheel and driving in port city of Jeddah for four days without being stopped. Najla al Hariri, a housewife in her mid-30s, said in an Agents France Presse article that she drove "to defend her belief that Saudi women should be able to drive.

"I don't fear being arrested because I am setting an example that my daughter and her friends are proud of," Hariri told AFP. She also is offering driving lessons for women.

Another Saudi woman, Manal al-Sharif, was arrested after posting videos of herself driving on YouTube. She is urging all Saudi women to drive on June 17. And as with all anti-government protests these days, there is also an active Facebook campaign called "Teach me how to drive so I can protect myself," which has garnered more than 4,300 followers as of May 25 and is in support of al-Sharif's cause. Al-Sharif's original Facebook page drew about 12,000 supporters before it was removed.

I hope the momentum builds around this, and this "non-law" really changes. It's about time. In an interview with NPR, Khaled Al-Maeena, the editor of Saudi News in Jeddah, said there has been a negative effect with her arrest. "There is a counter campaign against it by certain elements in society. There are hardline conservative elements [that] are against participation and women," he said, adding that, "This goes against the grain of what the government is saying. . . . The king and crown prince are on record as saying that they're all for women's emancipation."

Saudi women and Muslim women around the world are watching to see what happens on June 17. More than the protest being a defiant act against Islam (which really has nothing to say about driving) or the current Saudi government (which is trying to usher in reform, albeit in a very controlled and slow place), this protest is against a patriarchal society that doesn't want to give up old ways, a society that believes forbidding women to drive is for their own protection.

Some argue that a woman shouldn't drive, especially alone, because she will be travelling without a mahram. A mahram, according to www.islamic-dictionary.com, is a male whom the woman could never marry because of a close relationship, like a brother, father, grandfather, or sibling. If a woman is married, her husband is her mahram. According to various Islamic texts, a woman need not wear a hijab (headscarf) in front of her mahram, and a mahram is usually needed for travelling long distances.

These men are considered a woman's mahram because it says in the Qur'an, "And marry not women whom your fathers married, except what has already passed; indeed it was shameful and most hateful, and an evil way. Forbidden to you (for marriage) are: your mothers, your daughters, your sisters, your father's sisters, your mother's sisters, your brother's daughters, your sister's daughters, your foster mother who gave you suck, your foster milk suckling sisters, your wives' mothers, your step-daughters under your guardianship, born of your wives to whom you have gone in—but there is no sin on you if you have not gone in them (to marry their daughters), . . . the wives of your sons who (spring) from your own loins, and two sisters in wedlock at the same time, except for what has already passed; verily, Allah is Oft-Forgiving, Most Merciful" (An-Nisa 4:22-23).