How the Republican Party Left Me

In the Name of the Kind and Beautiful Precious Beloved 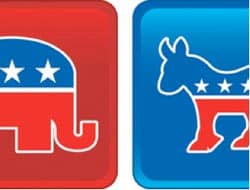 That all changed in the 2008 Presidential election. The repeated smears in Republican and right wing circles, that Obama was somehow a stealth Muslim, were particularly distasteful to me. The repeated stoking of fear and hatred against American Muslims for cynical political gain, and the failure of Republican leadership to repudiate it solidified my resolve to leave the party. So in 2010, I voted in my first primary election as a Democrat.

Now that the 2012 election season has begun to rev up, and the field of Republican candidates for President begins to come into clearer view, the question once again has entered my mind: Did I make the right decision? Was I correct in leaving the Republican Party as an American Muslim? Or was my decision too hasty, based on emotion rather than facts about where the Republicans stand?

And my answer is: Absolutely not, leaving the Republican Party was exactly the right thing to do.

Let's take the myriad of bills in more than a dozen states—all proposed by Republicans—that seek to criminalize or ban "Sharia law." It was a solution looking for a problem. There is no risk at all of Sharia law ever being used in American courts. Still, several Republican legislators felt it necessary to introduce bills to prevent such an eventuality. Some of these bills actually seemed to criminalize being a Muslim. Yet, there was no call from the National Republican leadership to decry such blatant anti-Muslim fear mongering.

Then there are the Republican candidates for President. Former Speaker of the House Newt Gingrich has repeatedly mentioned the "dangers" of Sharia law for the United States. His evidence, however, is sorely lacking. Candidate Herman Cain (the founder of Godfather Pizza) has said that he would be "uncomfortable" with a Muslim in his cabinet or as a federal judge. He even called for "loyalty tests" for Muslims—and only Muslims—who wanted to serve in his hypothetical administration. Again, I've heard no repudiation from any of the national Republican leadership, although, to his credit, Mitt Romney at least refused to attack Muslims for political gain. Yet, his voice, it seems, is a very lone one indeed.

Rep. Peter King from New York, who chairs the House Homeland Security Committee, seems to be "obsessed" with Muslims. He has held two hearings now about the "radicalization of American Muslims" and its threat to the security of our homeland. Now, there have been a few Muslims in America who have been radicalized and have attempted to commit acts of terrorism, but they are a minuscule number and they are not representative of the millions of good citizens in the American Muslim community, which studies have shown are patriotic, mainstream, and deeply loyal to the United States. But King's hearings seem bent to prove—and he has said as much—that the American Muslim community is somehow complicit in the acts of the few number of criminals who act in its name.

Once again, the response from the Republican leadership: a deafening silence.

Well, I am so very glad I left, and I haven't missed the Republican Party for a moment since.

This essay was originally published in Middle East Online and is reprinted with permission.