The Enduring Witness of St. Ignatius

July 28, 2011 by Matt Emerson
"Like" the Patheos Catholic Page on Facebook to receive today's best commentary on Catholic issues. 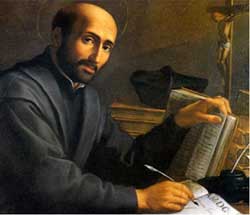 It began with a cannonball.

That is what I find, even having the heard story hundreds of times, so improbable that I feel moved to doubt it every time.

Before the Xaviers, the Bellarmines and the Campions; before the Gregorians and the Georgetowns, the Loyola this and the Loyola that, "A.M.D.G." and "Men for Others": before all that, a man had to go the wrong way, into the path of a cannonball that nearly killed him.

The man, Iñigo de Loyola, the future St. Ignatius, had shown no signs of sainthood. Born in 1491, Ignatius was about thirty years old when the cannonball cracked his bones and, more important, his ego. Up until that time, he was serving in the Spanish military, in lockstep with the plan predestined by lineage. But his personal history would at least resonate with generations of all-male prep schools; for Ignatius liked to fight (police cited him for brawling) and he liked to woo (according to historian John O'Malley, Ignatius later noted that he had been satis liber in mulierum amore:"fairly free in the love of women").

An afternoon would change all that. In 1521, defending Spain against a French incursion at Pamplona, Ignatius convinced his commanders not to surrender. The bravery endeared Ignatius to his comrades but also to a French cannonball, the latter shattering Ignatius's right leg and wounding the left, sending him to months of recovery in his family's home.

Immobilized, deprived of the tales of chivalry that he daydreamed of imitating, Ignatius turned in idle hours to the only material at hand: works on the lives of the saints and the life of Christ. Though he gave time to imagining the great deeds he would do in the service of a certain lady (a lady that historians have not been able to identify), he also began to dwell on the accounts of saintliness before him. In his autobiography, told in third-person, Ignatius said that in "reading the Life of our Lord and the Lives of the Saints, he paused to think and reason with himself. 'Suppose that I should do what St. Francis did, what St. Dominic did?'"

Over time, Ignatius discovered something about these suppositions:

When he was thinking of the things of the world he was filled with delight, but when afterwards he dismissed them from weariness, he was dry and dissatisfied. And when he thought of going barefoot to Jerusalem and of eating nothing but herbs and performing the other rigors he saw that the saints had performed, he was consoled, not only when he entertained these thoughts, but even after dismissing them he remained cheerful and satisfied.

The consolation, he determined, came from God, part of a divine invitation for Ignatius to abandon prior plans and funnel his feisty passion into the service of Christ.

The new man, however, would need time to mature. After his conversion, Ignatius wandered, enduring for about a decade a kind of Exodus experience. One of his first stops was Manresa, a town near Barcelona. There, Ignatius completed a major portion of what became his Spiritual Exercises; set himself to work, as he put it, on "helping souls"; and fought an attack of guilt and self-doubt that drove him to the brink of suicide.

He eventually found spiritual stasis, and soon after, left for the Holy Land. After a brief time in Jerusalem (where he was kicked out by annoyed Franciscans), Ignatius traveled back to Spain and then to Paris. It was in Paris where he befriended the core group of men that, in 1540, in Rome, received papal approval for a new order known as the Society of Jesus.

The subsequent history of that Society—its role in the Counter-Reformation, its extraordinary influence on Western education, its worldwide evangelization—is one of the great stories of the past 500 years. To the Society and its achievements, every Catholic is a fortunate, indebted heir.

Ignatius too, apart from his specific role in the Society, continues to exert a tremendous influence, and even now, centuries later, we feel something of his charisma. Today, the adjective "Ignatian" describes methods of pedagogy, prayer, and decision-making and serves as a bridge for those wary of organized religion but hungry for God.

In Ignatius, thoroughly a product of the sixteenth century, twenty-first century seekers find a sympathetic figure.

The life of a saint is a poem and a parable, every high and low, every heroic sacrifice, every galling renunciation offering an image or thought that draws us into its holiness and compels us to put our own existences on trial.