Editor's Note: For the next four weeks, while in residence at Gladstone's Library in Wales, one of the world's great research centers for theology and politics, Greg Garrett will write about British religion, culture, and politics in hopes that these essays might shed fresh light on American issues.

On of the most powerful men in the world, international media baron and naturalized American citizen Rupert Murdoch, has come to England this week to try and defuse a huge political and media scandal that has blown up into the biggest news in Britain just now—bigger even than Harry Potter! The "phone hacking" reported to have been carried out by Murdoch journalists is everywhere—on television, on radio, and in every newspaper, although of course the papers owned by Rupert Murdoch—the Sun, the venerable London Times, the Sunday Times, and until this past Sunday, Britain's most-purchased Sunday paper, the 168-year-old News of the World—have a very different slant on things.

Last Sunday was the final issue of News of the World, which stands accused of illegally hacking into the voicemails of thousands of cell phones, accessing the messages of war heroes, murder victims, entertainers and celebrities, and royals and high-ranking politicians. This scandal (and all its threads, as other Murdoch papers are now accused of illegally obtaining information for stories) has embroiled Mr. Murdoch and his News International (News Corp in the States) in a tempest that has cost them customers, confidence, and influence, and so far, has lost them seven billion dollars in stock value as, according to Bloomberg, who know more about such things than I do: "Investors are concerned about the scandal's effect on other News Corp. holdings, which include the Fox TV networks and film studios, the Wall Street Journal and three other newspapers in the U.K."

This seems to be much more than partisan bickering or a tempest in a teapot, because the scandal is ultimately about much more than whether Murdoch's journalists broke the law and violated people's privacy. As Steve Richards writes in The Independent, which is not affiliated with any political party or stance, "This feels big and significant, a crisis which might lead to profound and positive changes in the relationship between media and politics." It might also be a game changer in the States, where angry News Corp shareholders decry either the business practices or the financial losses, and there is talk of prosecuting News Corp under the Foreign Corrupt Practices Act.

Outrage in the U.K. is coming from all directions. In some cases, it has to do with the violation of privacy, in others, with allegations that News of the World paid off police to keep things quiet, and reports that they willingly paid huge settlements to victims to keep things hushed up. More important, perhaps, is the rising indignation against Murdoch and his media empire. Over the past four decades, they have made and broken prime ministers, shaped pro-business policies that have directly benefited News International, and contributed to a tabloid culture in which nothing is sacred and nobody is safe. But all that seems to have changed. The man whom British politicians once could not ignore is now under attack from all parties, and the charge is led by the leader of the opposition Labour Party, David Miliband, who a week ago was reeling and widely considered to be ineffectual.

Finally, the Church of England weighed in, as it ought, and made noise threatening to pull out its substantial investment in News International—some nine million pounds worth. The church's ethical investment advisory group wrote to News International, demanding immediate action to make amends for what they called this "utterly reprehensible and unethical" behavior. 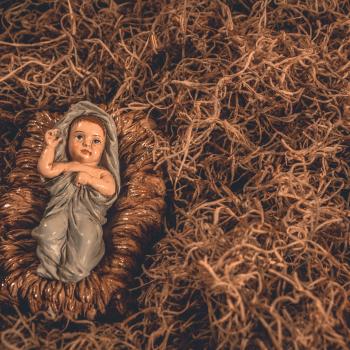 The Beauty of the Incarnation: A Meditation
Eric Scot English
Get Patheos Newsletters
Get the latest from Patheos by signing up for our newsletters. Try our 3 most popular, or select from our huge collection of unique and thought-provoking newsletters.
From time to time you will also receive Special Offers from our partners that help us make this content free for you. You can opt out of these offers at any time.
see our full list of newsletters
Editor's picks See all columnists