Not Just Another Pretty Face

July 13, 2011 by Pat Gohn
"Like" the Patheos Catholic Page on Facebook to receive today's best commentary on Catholic issues. 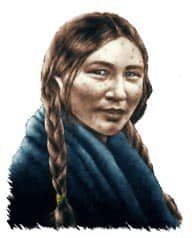 She might have been ugly by today's glamour standards. I don't really know, and there isn't a photograph of her because the camera had yet to be invented. She makes me think of people whom I know who have lived with some sort of disfigurement or scarring on their face. There is an acute form of social suffering attached to that. We can all call-to-mind the face of someone who is or was derided for being socially awkward, or worse, rejected.

In our media-saturated culture, we tend to unconsciously focus on exteriors and externals. We're often unaware that we're doing exactly that. We look for what catches our eye or grabs our attention. This sometimes gives us a warped sense of beauty and we have to dig deep to understand what "beauty within" is all about.

Sadly, given the stressors and conflicts in society, we might unintentionally be profiling the people next to us, especially if they differ from us in terms of race, nationality, religion, or sexual mores.

Now imagine a woman who faced rejections on many of those same levels, but still lived a grace-filled life of interior freedom. We might call her a saint. Or, as in the case of Kateri Tekakwitha, a blessed.

July 14 is the feast day of Blessed Kateri Tekakwitha, the first Native American to be to be beatified. She was the only survivor from her family of origin when small pox infected her village. That's how it was in the 17th century, before the age of vaccines and antibiotics. European settlers to the Americas had not only brought their trade and their Christian faith, unfortunately, they also brought their diseases.

Born in 1656 in the Mohawk River Valley in what would become Auriesville, New York, Tekakwitha had a Christian Algonquin mother and a pagan Mohawk warrior father. Tekakwitha's battle with the small pox left her face pock-mocked and scarred, and with very poor eyesight. Her name translates to "she who bumps into things."

Orphaned as a 4-year-old child, Tekakwitha was taken in by an uncle who mistrusted "the white man's" Christian religion as much as his killer diseases. But Tekakwitha maintained a fondness for the memory of her mother's religion, even when she was traditionally promised as a future wife to a tribal boy at the age of 8.

A Christian mission was erected nearby, founded by the Jesuits, when Tekakwitha was a teenager. She secretly began taking religious instruction with "the black robes." She was baptized in 1676, at the age of 20, and given the name Kateri—Catherine, in her native language.

Kateri's joy at becoming a Christian faced open hostility from the members of her tribe. Despite this rejection, she was devoted to Christ and, knowing nothing about religious life, pledged her life to Christ as a virgin, foregoing marriage and security, making her a certain outcast among her tribe.

Kateri's own words describe her courage in her adversity.

I am not my own; I have given myself to Jesus. He must be my only love. The state of helpless poverty that may befall me if I do not marry does not frighten me. All I need is a little food and a few pieces of clothing. With the work of my hands I shall always earn what is necessary and what is left over I'll give to my relatives and to the poor. If I should become sick and unable to work, then I shall be like the Lord on the cross. He will have mercy on me and help me, I am sure. (Source: Saint of the Day)

Kateri's persecution reached a treacherous point, whereby her safety was threatened by violence. The priests she knew helped her relocate to a Christian settlement in Canada with other Native Americans. She made the 200-mile journey on foot.

Kateri Tekekwitha's love of the Eucharist was passionate, and she was allowed to make her first holy communion in short order, an exception to the usual waiting period applied to new converts. She was known to be at church's front doors at 4am every morning, and stayed in the little chapel until after the last Mass of the day. She filled the rest of her hours with penitential practices of fasting and service. She taught little children their prayers and spent time tending the sick and the elderly within the community. She prayed for the conversion of her Mohawk nation.

Kateri's life was one of heroic virtue in the face of painful rejections. Rather than grow in bitterness, she found ways to keep her heart open to Christ and others.  Her motto became: "Who can tell me what is pleasing to God that I may do it?"