July 24, 2011 by Star Foster
"Like" the Patheos Pagan Page on Facebook to receive today's best commentary on Pagan issues. 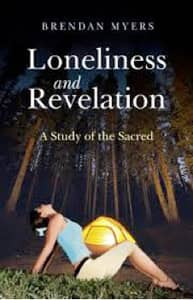 Brendan Myers is a professional philosopher and author of several well-received books. I read his book Loneliness and Revelation: A Study of the Sacred last spring and I found it to be a revelation in and of itself. He was kind enough to answer a few questions I had about the book.

I began reading your book in an airport, which is your classic "alone in a crowded room" scenario. It seems to me that folks who are attracted to Paganism have a more-than-average awareness of this "loneliness of spirit," or "Otherness." Do you think being Pagan led you to explore the concepts of loneliness and revelation?

Actually, the impetus to explore loneliness came from reading a social study that found that half of all Americans have only one friend in the world, and one-quarter have no one to confide in at all. This astonished me; and I wanted to find out more about the situation, and also explore its philosophical significance.

It's clear to me that anyone, anywhere, can experience loneliness, isolation, solitude, and estrangement; and most people probably do encounter these things, at some point in their lives. People in minority religious communities, like Paganism, often feel isolated and even marginalized by others because of the lifestyle differences associated with their spiritual path. Yet those who are members of mainstream religions can, and frequently do, experience loneliness and isolation as well. People who are not especially religious feel it also, for instance when their lifestyle or appearance is sized up by others, judged, and found wanting.

At the risk of sounding like a spoilsport, I'd say that pagans have about the same experience of otherness and isolation as anyone else. We're not special in that regard. But this is because the problem of loneliness is almost universal—and that, to my mind, makes it much more serious.

You suggest that the mystic path leads to even deeper loneliness and I find that fascinating. I've always rebelled in my heart against mysticism or universalism. Ancient Paganism always had a unique tension between the individual and civic/tribal duty. Do you think it's fair to say that Paganism implies "we're all alone in this together"?

If we are, as you say, "all alone in this together," this is because we are human beings who live in a world configured by natural immensities like the solitude of selfhood. And this has little to do with Paganism as such; it has much more to do with being alive on earth, and being human. Thus many religions have an account of the loneliness of a central spiritual hero as part of its story.

Think of Jesus sojourning in the desert for weeks before beginning his career as a prophet and messiah; think also of his passion in the Garden of Gethsemane, prior to his arrest. In Buddhism, we have the example of Siddartha Gautama's solitude beneath the Bodhi tree. Pagan examples do exist—for instance, Odin's nine-day ordeal on the World Tree.

Modern paganism, however, tends to emphasize relationships, especially the ecological "circle of life." At the same time it also emphasizes individualism and the importance of personal seeking. Indeed, shortly after launching the book, many pagans told me that they feel no loneliness because, as they say, the gods are always with them, or because they find their source of self-worth within.

But these explanations never seemed good enough for me. When we turn outward, to our relationships, we soon find, among other things, the absolute difference, otherness, and even strangeness of others. And when we turn inward, we soon find the absolute uniqueness of the individual, which in turn leads to the discovery of each individual's absolute distance from others. A "pure type" individualist locks himself within himself, and soon confronts the problem of loneliness, whether she is willing to admit it or not.

Moreover, even the gods themselves are lonely. If they exist, and if they are some of what people think they are, then they understand the solitude and the emptiness of things much better than we do, and probably ache with that experience much worse than we do. Loneliness is an existential condition; it is inherently bound up in our way of being in the world. But so is its opposite, revelation, which is the gift of presence we offer each other whenever we meet. This is only a short description of the nature of the problem, of course; in the book I describe it more carefully and completely. But it is the solitude, itself, rather than its special appearance in any given religious tradition, is the central question of my book.