Author's Note: This was written just following the Parliament of the World's Religions in Melbourne, December 2009.

A friend tells a story about people cleaning the kitchen in a monastery. One admonishes the dishwashers, "Remember, these are the Buddha's bowls!" The sensei, walking by at that moment retorts, "They are not the Buddha's bowls! They are the Buddha's flesh!" This speaks volumes about our relationship to what we consider to be "objects" and to the parts of Pagan theology that say the Divine is immanent and that everything is sacred.

I've used this story in teaching as a way to illustrate how we treat our "stuff" and why it is that we value a hand-thrown plate more than a factory-made plate. Our animal soul responds to the amount of life force, care, and intention we can sense in the hand-crafted object. We tend to devalue the factory-made object because we have a harder time relating to it energetically. Yet both are of similar substances and both hold the pattern of the Immanent Divine.

However, a sense of distance from the sacredness of some objects makes it easier to have a "throw away" culture in which the inexpensive is considered to be disposable—less sacred—than the expensive. Sometimes expense reflects the amount of labor that went into the manufacturing, and other times it is product of some strange status attached to a particular brand. In any case, the landfill grows, resources dwindle, and we keep on buying more, rather than relating more thoroughly with what we already have. These days it is difficult even to get anything repaired. It's cheaper to get a new one. And in some cases, the technology shifts so quickly, the thing needing repair is already outdated. So what do we do with that part of God Herself? We send it back to China where elderly women and children salvage the various metals, often at great cost to their health.

This is a part of Pagan theology—and truly any theology that wishes a right relationship with Nature in all its forms—that I would like to ponder further. It feels important to the consistency of our "beliefs": "Everything is sacred." "We are all part of the web of life." "Thou art Goddess." What do these things really mean when lived? And are we living them?

Two things at the Parliament of the World Religions gathering stood out for me as helpful additions to this topic:

Ainu elder Tsugio Kuzuno spoke of the damage Japan has done to the earth and people by investing so heavily in "growth culture." In the midst of his ideas on this, one thing stood out sharply: ". . . spirits accumulate also in man-made objects. When you make something, you are responsible for what you have made. There is a dark side and a light side to every product. You should not make something that cannot be reabsorbed into nature."

That statement orients us clearly in the sacred, does it not? It implicates our current practices directly in the rending of human relations with the kamui of Mother Earth and gives a clear directive for repairing this rupture. The mending begins within, with human attitudes and human ethics. Are we in relationship with the material world or not? As Pagans, I think our answer would be a resounding "yes." So what does that mean for all of our choices and actions? Theology includes practice.

The second idea that feels germane to this discussion came during the presentation, "The Revival of the European Pagan Traditions." Andras Corban Arthen said that in Gaelic there are two different ways of using the possessive tense, each with its own word. One, which translates as "mine," only represents something that made you or that you made. For example: "my ancestors" or "my child" or "my boat" (if you fashioned the boat) or "my book" (if you wrote the book).

The other possessive form translates as "I am with" to show that you are in relationship with the house or land, or with your partner or colleagues. There is no word for "owning" something that you have not directly made.

This seems like a very helpful distinction. In American terms, I might say that we are in closer relationship with a house that "we own" than one "we rent" because our responsibility to it is greater. But closer relationship still does not connote actual ownership. We can tie this back to Kuzuno's thoughts on responsibility for things we have made. If Dell or Apple computers says "these are our computers" in the first possessive usage, they are taking responsibility along with ownership. Not only can they claim credit for the benefits that their computers give, they must claim responsibility for the toxic waste that is the end product, and by extension the health of those workers affected by the salvage. 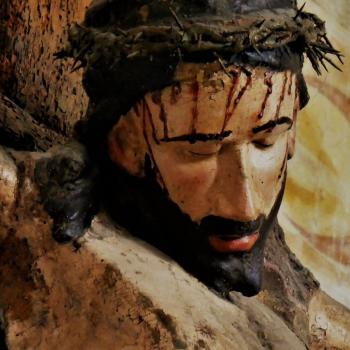 Why Did Jesus Have To Die?
Keith Giles
4

Oh then, Brothers, with your armor, Heed ye not the siren charmer!
John Mark N. Reynolds
Get Patheos Newsletters
Get the latest from Patheos by signing up for our newsletters. Try our 3 most popular, or select from our huge collection of unique and thought-provoking newsletters.
From time to time you will also receive Special Offers from our partners that help us make this content free for you. You can opt out of these offers at any time.
see our full list of newsletters
Editor's picks See all columnists