Anyone who has ever worked on a construction crew, especially one that specializes in home repairs and remodeling, knows about the "pile-men." These are the members of a crew assigned to remove the piles of garbage, unusable wood scraps, insulation remnants, broken shingles, and cracked bricks that accumulate over the course of a given project. As the sons of a general contractor, my brothers and I spent many summers during our teenage years as "pile-men" on different construction sites. The scenario was always the same: arrive at the job early, get a cup of coffee, strap on our tool belts, and wait for the day's assignments. Dad would issue the important ones first—framing the walls, sheathing the roof, or spackling the drywall. Then he would turn to us: "John, Mike, and Chris," he would bark, "I want you guys to start getting all the junk on the pile into the dumpster."

While we were never surprised by our assignment—it's what we were there for—we were often overwhelmed by it. The pile could stand as high as fifteen feet off the ground and sprawl over much of an average front yard. Since the pile grew in size as more and more refuse was heaped upon it during the course of the day, it seemed as if we were hardly making any headway toward the completion of our assigned task.

Today, at family gatherings, we often reflect comically on those days. Our reminiscences, much to the amusement of my father, are always heavily exaggerated. In our collective memory the "pile" sometimes exceeds three stories in height and includes fifty-pound cinder blocks or rain-soaked sheet-rock that required Herculean strength and three pairs of hands to move. As I participate in these nostalgic recollections, I remember both the seeming impossibility of the task that faced us on those hot summer mornings and the deep feeling of accomplishment I had when the work was completed. While my sense of satisfaction was probably partially guided by the fact that the workday was now done and I could go home and eat, relax, or watch the Mets on television, there was also a certain dignity to this very menial task. We tackled a difficult job head-on, displayed physical toughness, and returned home with a sense that our labor had meaning.

Moreover, we worked in a community that went deeper than our obvious biological connections. The petty quarrels of teenaged brothers often dissipated as we labored together in a common enterprise and helped one another along the way. The work seemed to bring out certain virtues in us that ultimately strengthened our relationships. The lessons that I learned about work during those summer days were good lessons, and they remain with me today as I think about my place in the world and my understanding of labor.

Toil, according to Genesis 3, is a product of the fall. Work is something in which all humans must engage. But at the same time, work can bring a sense of Christian dignity and worth to those who perform it. St. Paul reminds us in Colossians 3 that "whatever you do, do your work heartily, as for the Lord Christ whom you serve." We are to be diligent in the place where God has seen fit to have us labor because no matter how insignificant or tedious our work might seem, we are still called to it by God. When understood this way, work takes on a Christian and decidedly spiritual dimension. It becomes one means by which we live out our sanctification in this world. Ultimately, God calls each of us to a different task and we, as God's creation, must heed the call with all of our hearts and minds. Christ continues the work of creation and redemption through us. It is thus our responsibility to tend to this call of discipleship—whatever it may be—and pursue it toward the building of the Kingdom of God.

Following the events of September 11th, the pile-men of New York City would spend months in the rubble. At first they were looking for survivors and dead bodies. Eventually they would be responsible for clearing the pile so that the people of New York could get back to their daily lives. At the Fresh Kills landfill on Staten Island, hundreds of workers sifted through the debris in search of the personal effects of those who lost their lives on that tragic day.

Their actions should force us to think more deeply about the meaning of vocation. I imagine it would be very difficult to perform these tasks without some sense of calling.

I tell my students that there are no heroes in history. We are all flawed human beings—sinners in need of redemption. Because of this theological belief, we should not be surprised when people disappoint us. (I also tell my students that there are no villains in history—all of us are created in God's image and thus have dignity and worth). But this does not mean that people in the course of human history have not performed heroic acts. 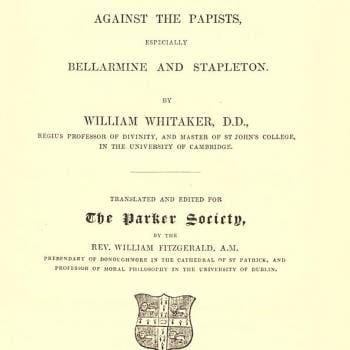 So Much Love, Fear is Gone, Joy is Possible
John Mark N. Reynolds
Get Patheos Newsletters
Get the latest from Patheos by signing up for our newsletters. Try our 3 most popular, or select from our huge collection of unique and thought-provoking newsletters.
From time to time you will also receive Special Offers from our partners that help us make this content free for you. You can opt out of these offers at any time.
see our full list of newsletters
Editor's picks See all columnists