Who Is My Enemy? A Book Excerpt 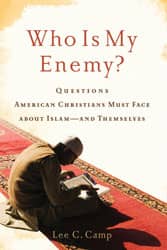 Who is My Enemy? Questions American Christians Must Face about Islam—and Themselves
By Lee C. Camp

—A Nashville resident,
on the local Muslim population

On a recent Independence Day, I delivered a lecture in which I shared my developing understanding of Christian and Muslim views of war and peacemaking. In the question-and-answer period that followed, a woman noted that since it was the Fourth of July, we should all be very thankful for our liberties. That being the case, she asked, how should we respond to those people just down the street here in Nashville, down at the mosque on Twelfth Avenue, "all these people who want to kill us?"

I was so taken aback, I found it difficult to know how to respond to the cavalier stereotyping of one and a half billion people. "I don't think the people on Twelfth Avenue do want to kill us," I said after a moment of awkward silence. "I do," she responded without pause. "Why . . . well . . . ," I stammered, "have you talked to any of the people on Twelfth Avenue?" "No," she replied, "but I've read books." I was sure—and I said so—that she was quite terribly wrong. But I was not equipped sufficiently, either intellectually or experientially, to articulate all the ways in which she was wrong. Nor was I sufficiently equipped to voice my conviction that her companion was also wrong. He had raised an objection that I had previously heard from others, that there is only one way to understand the Muslim's view of the world: there is the house of Islam and the house of war. Those not submitted to Islam must be the target of war until they submit. And moreover, he said, any Muslim who says otherwise is merely practicing the Islamic art of deceit. When I cited one source from a well-credentialed Muslim scholar to the contrary, the man replied, "I don't care what your little book says. I'm telling the truth."

I was already acquainted with such hostility. One pleasant November morning I strolled to the end of our driveway to peruse the morning paper before leaving for the ivory tower where I hang my shingle. Reading the Nashville morning paper is no habit of mine. Pure self-interest motivated me, expecting a story to mention a lecture I had delivered at an "interfaith gathering." Our university's new Institute for Conflict Management convened the gathering to make space for honest dialogue among practitioners of various faiths in Nashville. As a faculty member of the university, I was assigned to speak on the "Theological Ground for Peaceful Coexistence."

In the Southeast, where our particular Christian tradition has its largest number of congregations in the United States, it has not been uncommon for jokes to be made regarding our sense of superiority, our historical sense that we have been the only "real" Christians, that we embody the "true church," and no others. The stereotype is in many ways out-of-date, but stereotypes die a slow death. Thus, for us to host a gathering of not merely different sorts of Christians but also adherents of other religions was no small step. It had been, I thought, a good day. I was impressed that there was none of the drivel that seems often to pervade ecumenical or interreligious sorts of talk, none of that pabulum that suggests we are "all saying the same thing, just in different ways."

But serious conversations, carefully nuanced and peppered with rhetorical questions, can quickly get misconstrued. The story I expected to be buried deep in "Local News" was instead an above-the-fold front-page story titled "Christians Must 'Let Go' of Some Beliefs for Sake of Peace, Theologian Says." Readers concluded I had argued that we should "let go" of the lordship of Jesus precisely for such so-called peace.1 I uttered an expletive and went into the house to let my wife know it was going to be a long day.

When I arrived at my office shortly thereafter, I was dismayed when one of the departmental assistants knocked on my door to let me know that a Nashville talk-radio program was on the line, asking for me. In less than three hours, I had been contacted by talk radio in Detroit and Fox News in New York City and was getting unhappy emails from across the Southeast. The local Nashville rap station, one student reported to me later, held a call-in survey. I was found to be "stupid" by a wide margin. My inbox filled; the phone rang incessantly—hundreds of messages by the end of the day. I heard from people across Tennessee, then California, New Zealand, Manhattan, and Israel. By the end of the day, I had been called a moron, an idiot, a dhimmi, and an a**hole. The following evening's lead news story on the local Fox affiliate covered the uproar, complete with name-calling and demands that my job be revoked without further delay.