Can Complainers Gather Between Heaven and Mirth?

December 06, 2011 by Max Lindenman
"Like" the Patheos Catholic Page on Facebook to receive today's best commentary on Catholic issues. 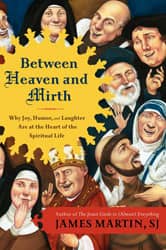 Disagreeing with Fr. Jim Martin, S.J. feels both unnatural and base. Not to sound too much like the freckle-faced boy demiurge from the old Twilight Zone episode, but he's a good man. He's a very good man! Yet in the name of goodness, he comes after chronic complainers with startling force. In his latest book, Between Heaven and Mirth: Why Joy, Humor and Laughter Are at the Heart of the Spiritual Life, he writes:

On the other hand, a culture of carping and general complaining predominates in some quarters . . . Everyone knows a few champion whiners, always lamenting some new fate that has just befallen them, complaining endlessly about their latest malady, confidently predicting an upcoming calamity and in general worrying everyone around them.

"Typically these people are self-centered," Fr. Jim adds. "And unpleasant to be around."

As I've written, where Fr. Jim's concerned, I'm a fan of several years' standing. I can't recall him condemning anyone or anything with such vehemence since James Carroll argued that mandatory celibacy packs the priesthood with cold-blooded control freaks. He's not entirely wrong; artless or repetitive complaining is just plain irksome. But undertaken by a person of wit or taste, complaining becomes a kind of power plant. It refines raw pain into the kind of humor that pulls speaker and listener toward the kind of joy Fr. Jim recommends as the goal of any life of faith.

Where to start? An example? Okay, take "The Old Main Drag," a ballad that appeared on Rum, Sodomy and the Lash, the Pogues' second album. Written in the first person by Shane McGowan, the band's front man, it recounts the story of a 16-year-old who follows his dreams of stardom to London and finds nothing but trouble, trouble, and more trouble. He falls into prostitution and pills, is savagely beaten by policemen, and ends up living in a Tube station where "the old ones/who are on the way out/Will dribble and vomit/And grovel and shout." In the song's last stanza, he summarizes his life as a long series of humiliations: he's been "spat on" and defecated upon "and raped and abused." When he assures listeners, "I know that I am dying," they can't help feeling a little relieved on his behalf.

Now, this might sound like the furthest thing from humor. But the tone is so hyperbolic, the images so vivid—this may be the first, if not the only time the word "dribble" has appeared in a popular song—it's hard not to laugh. And laughter might well have been among the effects McGowan was aiming for. For the past three decades, he's dined out on making the pathetic grotesque, the grotesque hilarious, and the hilarious defiant. In "Sick Bed of Cuchulainn," on the same album, after describing another litany of misadventures, McGowan tells listeners "they'll take you to Cloughprior and shove you in the ground/But you'll stick your head back out and shout 'we'll have another round.'" Unlike the lyrics of "Cuchulainn," those of "Main Drag" end at the tomb, but we can at least take some comfort that McGowan's given his narrator a vivid wake.

Let's circle back to the self. Fr. Jim has nothing but praise for self-deprecation, which he sees as a healthy hedge against a natural tendency toward self-inflation. His beau (or not-so-beau) ideal for this kind of thing is Pope John XXIII, who once deflected a harsh review of his figure by observing that "the papal conclave is not a beauty contest." Like so much of what Papa Roncalli said for the record, the line is well-timed, charming, and suggests a well-ordered mind and soul. At least to my ears, these are the very qualities that make it less than poignant. It's been a while since I've read Peter Hebblethwaite's biography, but I don't recall that body image was ever a major problem for John. If that's an accurate impression, then joking about his weight was no riskier than gambling with Monopoly money.