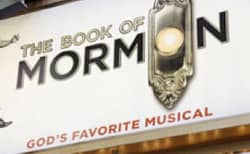 At one point in The Book of Mormon Musical, my eyes teared up. It was when Elder Price, singing "I Believe!", leaped into the Ugandan village and declared "Satan has a hold on you!" It wasn't his declaration that moved me, but his leaping into the unknown. It reminded me of Elder Henry Lisowski, who reported his growing bravery in these words:

One other change I've noticed is how much I like and am able to just talk with people about the Gospel. Before, I was shy, wouldn't talk to anyone, was AFRAID to, and just didn't bother anyone because I was afraid they'd get upset at me. After a year and a half of praying, it would seem that all of that fear finally just . . . disappeared. And now, things like this happen:

Walking through the quartier, I see an open door.

Me: "Target locked, we're going in! Stay on target!"

(*walk through the door*)

Elder Wagman: "We can't contact them, they're eating togeth. . ."

Me: "HELLO! We're the missionaries and we're going to sit down right here and talk to you about the gospel. Where are some chairs?"

(I may not have said it EXACTLY like that, but that's what HAPPENED. . . .Wait, the whole target lock stuff I did actually say).

Basically, realizing that this week has made me happy.

In that same song ("I Believe") is the line that has impacted current politics more than any other: "I believe that God has a plan for all of us. I believe that plan involves me getting my own planet.""

So sings the fictional Elder Price. This line apparently inspired a "man on the street" interview sequence from a Memphis talk show host. In early July, the host asked various people which GOP candidate believed he'd get his own planet after death. (The answer was Romney.) In August, an ex-Mormon on CNN said that Mormons indeed believe that good behavior on earth will be rewarded planetarily—and that Mormons will (of course) be in charge of pretty much everything.

Mormons do believe that every person on earth is eternal, a child of God, formed in the image of God, and that each has limitless potential. We believe in Christ, and that through Him we may partake of the divine nature as "co-heirs" (Rom. 8:17). But what this ultimately means is incomprehensible. We are far better served to focus on the here and now.

Missionary work is very "here and now." Mormon missionaries preach, work, and learn to care about those they teach. They seek to baptize converts and thus invite them into the community of Latter-day Saints, where they will assume responsibilities of their own.

One such convert was Bala Foe Crepin, who joined the Church in 1993, and later became one of Cameroon's greatest missionaries and the branch president in Yaounde.

President Bala participated in the arduous pilgrimage of Cameroonians to the Nigeria Temple, two weeks after it was dedicated. Among other challenges, these Mormon pilgrims had to rescue their mini-buses from wheel-engulfing mud on slippery, unpaved roads, and to walk when necessary. (See it on YouTube here.) The journey lasted nearly three days. President Bala, his shirt completely caked with mud, smiled as he helped push his mired bus.