Secular Theocracy: The Foundations and Folly of Modern Tyranny, Part 1

January 24, 2012 by David J. Theroux
"Like" the Patheos Evangelical Page on Facebook to receive today's best commentary on Evangelical issues. 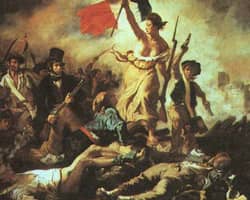 We live in an increasingly secularized world of massive and pervasive nation states in which traditional religion, especially Christianity, is ruled unwelcome and even a real danger on the basis of a purported history of intolerance and "religious violence." This view is found in most all "public" domains, including the institutions of education, business, government, welfare, transportation, parks and recreation, science, art, foreign affairs, economics, entertainment, and the media. A secularized public square policed by government is viewed as providing a neutral, rational, free, and safe domain that keeps the "irrational" forces of religion from creating conflict and darkness. And we are told that real progress requires expanding this domain by pushing religion ever backward into remote corners of society where it has little or no influence.

In short, modern America has become a secular theocracy with a civic religion of national politics (nationalism) occupying the public realm in which government has replaced God.

For the renowned Christian scholar and writer C.S. Lewis, such a view was fatally flawed morally, intellectually, and spiritually, producing the twentieth-century rise of the total state, total war, and mega-genocides. For Lewis, Christianity provided the one true and coherent worldview that applied to all human aspirations and endeavors. As he wrote in The Weight of Glory, "I believe in Christianity as I believe that the sun has risen, not only because I see it, but because by it I see everything else."

In his book, The Discarded Image, Lewis revealed that for Medieval Christians, there was no sacred/secular divide and that this unified, theo-political worldview of hope, joy, liberty, justice, and purpose from the loving grace of God enabled them to discover the objective, natural-law principles of ethics, science, and theology, producing immense human flourishing. Lewis described (in The Abolition of Man) the natural law as a cohesive and interconnected objective standard of right behavior:

This thing which I have called for convenience the Tao, and which others may call Natural Law or Traditional Morality or the First Principles of Practical Reason or the First Platitudes, is not one among a series of possible systems of value. It is the sole source of all value judgments. If it is rejected, all values are rejected. If any value is retained, it is retained. The effort to refute it and raise a new system of value in its place is self-contradictory. There has never been, and never will be, a radically new judgment of value in the history of the world. What purport to be new systems or (as they now call them) "ideologies," all consist of fragments from the Tao itself. Arbitrarily wrenched from their context in the whole and then swollen to madness in their isolation, yet still owing to the Tao and to it alone such validity as they possess. If my duty to my parents is a superstition, then so is my duty to posterity. If justice is a superstition, then so is my duty to my country or my race. If the pursuit of scientific knowledge is a real value, then so is conjugal fidelity.

And in his recent book, The Victory of Reason, Rodney Stark has further shown "How Christianity Led to Freedom, Capitalism, and the Success of the West." Similarly and prior to the rise of the secular nation-state in America, Alexis de Tocqueville documented in his 1835 volume, Democracy in America, the remarkable flexibility, vitality and cohesion of Christian-rooted liberty in American society with business enterprises, churches and aid societies, covenants and other private institutions and communities.