John 12:20-33
March 25, 2012
When we go on vacation, I'm content to wander around and take things as they come. My husband is more of a planner. He likes to have specific destinations when we visit an area. He likes to have a reason—we have come to see this attraction or that. It sounds like the Greeks were planners. They didn't just wander to Passover to stroll around town. It sounds like Jesus may have been the whole reason for their trip. They first approach Philip. "We wish to see Jesus." "Yeah, you and everybody else," may have been his internal response. "Take a number and get in line."

But he utters no such negative remarks. Instead, he institutes a first-century version of a phone tree. You know the phone tree. You call to speak with a particular person and are given multiple phone prompts while you wait more or less patiently and never do get to speak to the person you were hoping to speak to, the person who was the whole reason for the call. "Please hold while I consult with Andrew," and then, "Please hold while we consult with Jesus." It's a first-century version of "Your call is important to us. All of our operators are currently serving other customers. You will be served by the first available operator."

This reminds me of waiting behind the yellow line to get your passport checked at the airport. Or being handed a device at a restaurant that will light up and buzz when your table is ready. As best as I can tell from the text, the Greeks never do get an audience with Jesus. I picture them still standing behind the yellow line, still waiting for their table.

That must have been disappointing for them. They had probably approached Philip because he had some Greek connections. He and Andrew were the only two disciples known by distinctively Greek names. In everyday life, sometimes people seek us out with regard to matters of faith, because they see something we have in common. Or maybe we seem approachable or like a good listener. We need to be careful that we don't make them wait behind a yellow line. There may be a reason of which we're not aware that has drawn them to us to be the ones that introduce them to Jesus.

But suppose the Greeks had been close enough to overhear Jesus' response to the news that they were waiting to see him. They were hoping for, "By all means, show them in." But that's not what they get. It's always revealing when someone talks about you without realizing you can hear them. If they had been in earshot, the Greeks would have learned that, in Jesus' mind, their arrival had far more importance than they realized. Their arrival signals that the hour has come for the Son of Man to be glorified. Throughout John's Gospel, Jesus has pointed to this hour (2:4; 4:21, 23; 5:25; 7:30; 8:20) as an event that was in the offing but had not yet arrived. Their visit signals that that hour has come. They are like the first kernel of popcorn that pops. In Jewish thought the death of a martyr was regarded as bearing much fruit. It benefited others and the nation as a whole. So Jesus' death will produce "much fruit," as the whole world is drawn to the salvation and life it brings about (12:32). Just before the Greeks' visit, in John 12:19, the Pharisees make an accurate assessment of the situation: " You see you can do nothing. Look, the world has gone after him!"

Continuing to listen in, the Greeks would hear a lesson in discipleship. If you want to follow Jesus, understand that you must be, like him, a grain of wheat that falls into the ground and dies in order to bear much fruit. You cannot hoard your life (psyche in Greek, nephesh in Hebrew), making your survival your goal. You must have a higher allegiance, one born out of belief in and following the Son of Man who is glorified and who glorifies God in his crucifixion and resurrection. A similar aphorism is found in Mark 8:35, Matthew 16:25, and Luke 17:33. Here in John this advice on discipleship is set in a Christological context. Jesus is the supreme example of one who finds by losing, who brings a great harvest by dying.

We aren't exactly sure why the Greeks sought Jesus out. They said they wanted to "see" Jesus. In John "seeing" is code for understanding, for illumination. They wanted to see Jesus and presumably, to follow him. With his lesson on discipleship they've just overheard, perhaps their thoughts go to what they need to lose in order to live for him, experiences they've had of self-centered living that have shrunk their souls.

Continuing to listen in, they hear John's version of Gethsemane. It is quite different from the synoptic versions. In all three Jesus prays that this cup (and in Mark, this hour) might pass from him. While in Luke he kneels in quiet dignity, in Mark and Matthew, he throws himself to the ground in his anguish. John, by contrast, emphasizes Jesus' equanimity. While Jesus admits that "his soul is troubled, he immediately goes on to ring a change on Mark's version of Gethsemane (14:35, "If it is possible, let this hour pass from me."). In John, Jesus says, "Now my soul is troubled. And what should I say, Father, save me from this hour? No, it is for this reason that I have come to this hour" (12:27).

"The Violence of Reason": I review a retrospective of Cold War SF
Eve Tushnet
2 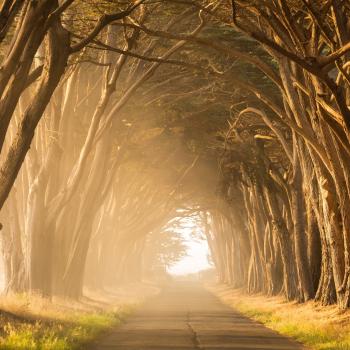 Are You on the Right Path in Life?
Tom Rapsas
3

The Cries of the Oppressed: Race and education: The Bible, injustice, and...
Rob Dalrymple
4

Being Lighter than Here
Sherry Antonetti