And that's just how it was. Eric became this kitten's mother.

In the middle of the night, the kitten would cry to be fed, cry to be drained of waste, and most heart-rending of all, he would cry just to be held. After the first two feedings in his first night, Eric decided to stop putting him back in the box and just let him sleep curled up like a fetus on his arm.

So how did Eric continue with his life? With his schedule? With his classes?

Well, leaving Samson (Eric named the kitten after Samson from the Bible for his toughness) at home was certainly not an option, so Eric took him to classes. One would think that teachers wouldn't accept a crying little box in their class, but when the said cat is the size of a large mouse, it tugs the heartstrings of even the hardest instructor; one of the lecturers even held him while she gave her lesson. Eric's favorite thing about having Samson around was that he got all kinds of love all over campus. Samson was a total "chick magnet."

A full week passed, the bags under Eric's eyes had faded, and the two of them—Eric and Samson—seemed to have found their routine. The only problem was that he had not grown at all in that time. It seemed Samson was eating less and less instead of more and more.

The other side of this story is more personal for Eric.

Six years earlier, Eric's mother had passed away from emphysema after a full ten years of battling it. Eric, in his short life up until that point, had never seen a more miserable situation. In an email to friends, he said, "There is nothing in the world like watching a human being die a slow and painful death—especially when it is your mother."

I mention this because Eric's kitten and his mother worked together to remind him of a few important things: In Judaism, when an immediate member of your family passes away, you are to say "Kaddish," which is a declaration of the some of the basic tenets of Judaism, annually on the Hebrew anniversary of their death. This elevates their soul and makes their transition into the afterlife more comfortable and rewarding.

Eric, not having the strongest Jewish background and instinctively trying to ignore past events that were difficult for him to deal with, neglected paying too much attention to when exactly this Hebrew anniversary of his mother's death actually fell out.

But, when he woke up to Samson's usual cry and found him freezing cold and limp (but alive), he was reminded immediately what it means to deal with the death of a loved one. Eric picked him up and tried to feed him, but he refused. He held him gently as he was barely breathing. He could not believe what he was seeing. He was looking down at his poor kitten and seeing his mother all over again. He looked at this unfortunate, innocent baby animal and apologized over and over again for not doing an even better job than he did. He begged it for forgiveness, and prepared to take him back to the vet.

Eric brought Samson back to the vet in the same box in which he had received him. He set the box down on the vet's table, and told him to help.

"There is nothing to do; he won't live," the vet told him.

Eric bawled like a child, and the vet tried to console him:

"You did the very best you could. I am sure of it. I tell you the truth, there is no food on the market, no human being in the world that could have replaced this cat's mother. There is nothing in this world that can replace anyone's mother, ever." He went on for another five minutes softly telling Eric how mothers are so important, and never in our lives will there ever be a replacement, and Eric just kept filling up one paper towel after another. He knew the vet was right. Never in his life could he really have replaced Samson's mother, and never in his life will he have a real replacement for his own mother.

He took Samson back with the box to his dormitories, and picked out a nice sunny spot under a tree where he could bury him. He brought along a spoon and dug a hole of perfect depth, lowered him in, and refilled the hole. He cut out a piece from the box for a tombstone, and wrote on it a long message.

Next, Eric thought to conduct a bit of a Jewish funeral service and made sure to read the "Kaddish" and to think about both this poor kitten and his poor mother.

Kneel Before the Cross with an Attitude of Gratitude.
Rebecca Hamilton
2 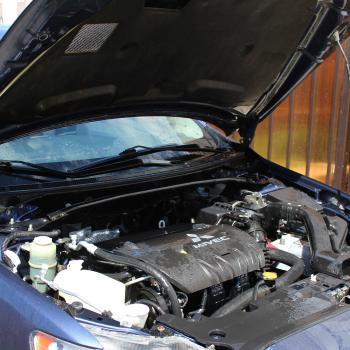 The Greatest Revealer of What's in our Hearts
Chris Walker
3