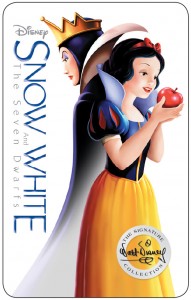 Walt Disney Studios Entertainment made Snow White and the Seven Dwarfs available on Digital HD for the first time last week, and it is releasing the film on Blu-ray this week to premiere its “Signature Collection.”

DVD reissues are sometimes more about the extras than the films themselves, and the Signature Collection’s assortment of Special Features might be construed as a round about admission that the first full-length animated feature is a hard sell to today’s audiences. An “Iconography” section explores the film’s impact on pop-culture, while a Disney Animation feature asks animators to discuss Snow White’s influence on future Disney princesses. (Teaser: We’ll be posting an interview with Disney animator Mark Henn later this week.)

Other extras, such as a rap, a trivia feature, and  an alternate story-board sequence appear aimed at getting those who have already seen the film to give it another look. That got me thinking, when was the last time I had actually watched Snow White?

I’m happy to report upon watching the film for the first time in years that despite showing its age in spots, the movie itself still stands on its own.

First the quibbles: I suppose nowhere does the film show its age more than in a scene in which Snow White, having fled the Huntsmen who was about to kill her (at the Witch’s command), tells the birds of the forest, “I’m so ashamed of the the fuss I’ve made.” While maybe not as irritating as the modern tendency to have female characters declare “it’s all my fault,” the scene does underline the fact that Disney films sometimes participate in the cultural work of reinforcing gender stereotypes in ways that don’t seem particularly progressive. The ease with which she falls into housework for the seven men also appears to being doing some cultural work about what makes the fair sex desirable — “Gooseberry pie! Hooray, she stays!” But only so long as she cleans as well as cooks.

And, of course, if Snow White was the first princess, she was also the first princess that needed to be rescued. Snow White comes to Blu-ray while Star Wars: The Force Awakens is still in theaters, and it is hard not to feel that they are bookends of a sort, mapping the poles of female (non-)agency in fantasy films.

That said, she is an agent in her own story. She runs away from the Huntsman, makes her own deal with the dwarfs, wins over Grumpy with her cheerfulness, and spends a minimum of time pining after the guy she just met.

If Snow White may have a harder time measuring up to contemporary princesses with more spunk (Belle) or personality (Elsa), the Witch continues to frighten every bit as much as contemporary villains. One of the things that always surprises me when I review early Disney movies–Sleeping Beauty, Dumbo, Pinocchio, and, yes, Snow White–is how scary they can be in spots. (The film was released pre-code, but the MPAA rating attached to the DVD is “G.”) I always just assume that I remember it as being scarier than it was because I was young. But the Huntsman’s horror at being commanded to bring Snow White’s heart, her mad dash through the woods (falling off a cliff into a lake with logs that morph into alligators), and the swelling music as she prepares to bite the apple are all really creepy.

Most scary may be the Witch’s transformation to an old hag. Last year I mentioned that Maleficent‘s reference to “all the power’s of hell” seemed jarring by contemporary standards. Modern films appear much more reluctant to frame their stories around traditional religious symbolism or to suggest that villainy is synonymous with evil. The Witch doesn’t mention “hell” like Maleficent does, but her bookshelf is populated with titles (Black Arts, Witch Craft, Black Magic, Sorcery, Poisons) that leave little doubt as to the source of her powers or the corrupting influence wielding them has had on her soul.

One reason I think Snow White is often hard to remember is that it is less plot-driven than some modern animated film. I had this wrong idea in my head that Beauty and the Beast emulated Hollywood musicals in making its songs showpieces with little expository value and that this was somehow different than traditional films that used songs to advance the plot and not a respite to them. “Whistle While You Work,” “Some Day My Prince Will Come,” and the dwarfs’ polka are not at all expository.

The thing, though, is that these pieces sometimes have the best art design, character moments, or creativity. As with Sleeping Beauty and Fantasia, we see Disney animators playing with style–using breaks in the plot to experiment with a freer, more expressionistic style. Even the color palette changes from scene to scene with the yellows and browns making me realize just how bright and splashy were the Disney Renaissance films of my youth.

Snow White and the Seven Dwarfs is historically important because it was the first of a genre. But there are plenty of works that were technically innovative but less artistically successful. When was the last time you went back and watched The Jazz Singer or the early talkies? Perhaps Snow White’s  greatest achievement is not that it opened the door for so many movies that might, truthfully, be even better, but that even in comparison to those later, greater films, it still holds its own, both as a work or art and as an entertainment.