This is a post that originally appeared on the 3 Pagans and a Cat website on June 20th, 2018. It was an attempt to put devotion, faith, and the experience of the divine into language. It was an attempt at expressing the numinous. I am no more able to describe the experience it attempts to convey now than I was then. Some things just are. You’ll know them when you feel them.

It’s skidding to the edge of a drop and that heartbeat-fraction moment when your heel settles on something solid instead of going over– when it feels like your organs take the plunge, but the rest of you stands still.

It’s putting your back up against a speaker bigger than you are, not hearing the electric drumbeat hum but feeling it thrumming into your bones, a sound-sense that will never leave you now, not really, not ever, tattooed into your marrow by pressure and synchronization and your rabbit-frantic pulse—

It’s standing in a high place, a desolate and unforgiving place where nothing touches you but sky, and there is the wind, and someone is in it.

It is a bell, ringing in your ribcage, more constant than a metronome.

It is sitting in silence, listening to your heartbeat, and knowing that it isn’t a drum but a wave—

It is being a tide.

It is being in the sea.

It is seeing an impossible shape.

It is hearing an impossible sound.

When I was a child, I was told: here is an impossible shape. But when I looked, I saw nothing.

“There is nothing to see,” I said.

So I walked with my eyes closed.

I heard an impossible sound.

I opened my eyes.

I cannot describe the experience of devotion, the feeling of faith.

About
Ode is one of the hosts of 3 Pagans and a Cat, a podcast about the questions and discussions between three pagan family members, each exploring different pagan paths and how their various traditions can intersect. Knowing just enough about the pagan path to get into trouble, Ode is a Syncretic Heathen, tarot reader, and inveterate queer. They're partial to interesting rocks, bones, animals that people don't trust, yelling about Justice and Towers, retelling myths with a lot of swear words and dramatic hand gestures, reading All The Academic Papers, and anything that is very, very small. You can read more about the author here.
Previous Post 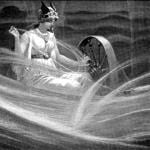 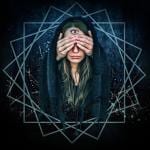 February 7, 2020 Review: Psychic Witch by Mat Auryn
Recent Comments
1 Comment | Leave a Comment
Browse Our Archives
get the latest updates from
3 Pagans and a Cat
and the Patheos
Pagan
Channel
POPULAR AT PATHEOS Pagan
1