The Few (Churchill’s Gratitude & Mine)

“The gratitude of every home in our Island, in our Empire, and indeed throughout the world, except in the abodes of the guilty, goes out to the British airmen who, undaunted by odds, unwearied in their constant challenge and mortal danger, are turning the tide of the World War by their prowess and by their devotion. Never in the field of human conflict was so much owed by so many to so few.”

It was a dark time. Winston Churchill found himself in a most inauspicious position. Elected British Prime Minister in early May, he and his country had already seen Europe fall into fiery conflagration and brutal occupation at the hands of Adolf Hitler and his Nazi juggernaut. In less than five years, the unthinkable had happened. First, between 1936 and 1939, came Hitler’s bloodless conquests of the Rhineland, Austria and Czechoslovakia while the the British and French leadership utilized little more than watchful eyes and wringing hands. Next came the Polish onslaught which dissected the great state between the despotisms of Hitler and Stalin and set up bloodlands unparalleled in history. Subsequently came the fall of the West with the conquest of Norway, Denmark, Luxembourg, the Netherlands, and Belgium. Finally, came the fall of France. The Nazi war machine achieved in six weeks what the Kaiser’s army could not accomplish in four years of World War I. And now, it was Great Britain’s turn. It was a very dark time.

As the evidence shows, Hitler was interested, for a time, in cutting a deal with the British. Solidifying such an agreement would afford Hitler the opportunity to fortify his astonishing gains in the West and turn viciously Eastward to bring his true dream to fruition: the occupation, enslavement and eradication of the Russian colossus in order to set up a “racially-pure” Nazi utopia. Winston Churchill, however, wasn’t biting. He knew how Adolf Hitler’s agreements ended – with populations ravaged and subjugated. The British would fight. Thus, in the three short months of his prime ministry, Churchill delivered spellbinding speeches illustrating British resolve with phrases like “blood, toil, tears and sweat”, “we shall fight on the beaches”, and “let us therefore brace ourselves to our duties, and so bear ourselves, that if the British Empire and its Commonwealth last for a thousand years, men will still say, This was their finest hour.” Churchill and his people were resolved. And Adolf Hitler hated him for it. Consequently, the British must be crushed.

This is how “Operation Sea Lion” came into being. Hitler and his military devised a punishing plan to gain air superiority over Great Britain, clear and dominate the English Channel, and invade the British mainland in what would amount to a “reverse D-Day” planned for September, 1940. Meanwhile, the British were scrambling to prepare for the attack after years of neglecting their military forces. Beginning in August, 1940, air raid sirens would blare and the British skies would roar as Luftwaffe (German air force) planes would parry with the Royal Air Force in dogfights unparalleled in military history.

Four days before his immortalized August 20, 1940 speech to the House of Commons, Churchill found himself in a Fighter Command operations room watching the harrowing fortunes of the struggle. It was early in the battle and things looked desperate. Yet in spite of seemingly insurmountable odds and considerable losses, the Royal Air Force fought on – valiant, determined, unwavering. As Churchill historian and biographer, Martin Gilbert describes it,

“[T]ravelling together in a car, in which Winston rehearsed the speech he was to give in the House of Commons on 20 August 1940 [during] the Battle of Britain. When he came to the famous sentence, ‘Never in the history of mankind have so many owed so much to so few’, [General “Pug”] Ismay said ‘What about Jesus and his disciples?’ ‘Good old Pug,’ said Winston, who immediately changed the wording to ‘Never in the field of human conflict’.”

The situation was dire and it was about to get worse. It would not be until several weeks after the speech, that “the Blitz of London” would ensue. The Blitz was the Luftwaffe’s tactical shift from the strategic bombing of Royal Air Force resources to terror bombing of civilian centers. It was a change from securing air superiority to breaking British morale. It would be rage, frustration and strategic ineptitude which would lead the Nazi leaders to make such a move. By sadistically trying to break the will of the British, the bombings reinforced it. By focusing less on the wavering Royal Air Force and its resources, the Royal Air Force rebuilt. Time marched on – August into September, September into October – and while the Battle of Britain and the Blitz would collectively last eleven months, Operation Sea Lion had to be called off. It was too cold to cross the English Channel in the winter and the British weren’t surrendering. Never again to attempt an invasion of Great Britain, Hitler had experienced his first, resounding defeat. What a defeat it was. And Winston Churchill was eternally grateful for it.

This weekend we enjoyed Thanksgiving. It also happened to be the 139th anniversary of Winston Churchill’s birth. Perhaps in this season of Thanksgiving (and now Advent), when distracted by immense amount of food, black Friday and days off from work, perhaps it is time for me to earnestly say thank you to “the few” in my life. My God who made and redeems me, my family who raised me, my wife and children who love, support and make my life extraordinary, my church and the Saints who guide me. And, yes, thank you to a dogged, tireless British Prime Minister who motivated a civilization and to British airmen whom I never met yet who gave their lives for something so good and against something so evil. Perhaps it is necessary for me to remember the great role of gratitude even in the midst of suffering and uncertainty. Perhaps it is time for me, like Churchill, to be so moved by the sacrifice of others, that I should simply be quiet – quiet, moved and painfully grateful.

“Never in the field of human conflict has so much been owed by so many to so few.” 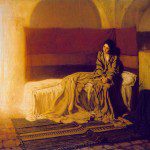 December 3, 2013 The Vital Necessity of Advent
Recent Comments
0 | Leave a Comment
Browse Our Archives
get the latest from
Catholic
Sign up for our newsletter
POPULAR AT PATHEOS Catholic
1

A Virus of a Film: A...
Steel Magnificat
Related posts from A Catholic Thinker