The Vital Necessity of Advent

Dear Jesus, do I need Advent. I just do. Living in the upper Midwest during the melancholic waning days of fall, begrudging the early arrival of snow flurries and enduring the bone-chill that summer had (mockingly) made me forget, I need Advent. You see, I am predisposed to what Winston Churchill once called “the black dog”. The black dog is an ill-defined woefulness that can gnaw at you at unpredictable times for indescribable reasons. Not classically a depression, it is rather a longing for something that is unfulfilled by anything here on earth. If not tilting into a fuller depression, perhaps this is a good thing. C.S. Lewis, after all, once wondered,

“If we find ourselves with a desire that nothing in this world can satisfy, the most probable explanation is that we were made for another world.”

And that is why I need Advent. Advent, originating from the Latin “Adventus”, means “a coming, an approach, or an arrival”. It is a season of anticipation, of expectation and of reform in preparation for the arrival. But what is it we are anticipating, expecting, and preparing for? Nothing more than the entry of God into History, the Word Made Flesh, the Messiah, the Savior of Mankind. We are awaiting, expectantly and eagerly, the Central Event of Human History. The Incarnation. Nothing less than that. And that is why I need Advent.

To me, this anticipation, this expectation, this preparation boils down to the supernatural virtue that best repels the “black dog”: Hope. Advent is a season of inextinguishable Hope. In a concentration of four weeks, our Sunday readings release an explosion of good news: A virgin girl charged with ushering the redeeming God into the world, a prophet (Isaiah) anticipating barren land becoming lush and the infirm becoming well, an imprisoned baptist assured that the One he foretold has arrived with glorious miracles, and a man comforted by angelic dreams answers his call to guard over the Child-God about to be born. Hope, glorious hope…found forcing its way into a society of brutal occupation, poverty, disease and injustice.

Advent is also a season of hope anticipating Christ’s Second Coming. In a way, our earthly experience of Advent is a paradoxical recognition of the humble human incarnation of Christ the Child as well as the majestic divine return of Christ the King. It is a season anticipating First and Second Comings. Advent reminds us that, while entrenched in the pain, loss and suffering accompanying our earthly existence, it is vital to be nurtured by the memory of Christ’s First appearance and comforted by the hope of His Second. St. Bernard of Clairvaux reminds us to be hopeful in this time between Christ’s First and Second Coming,

“We know that there are three comings of the Lord. The third lies between the other two. It is invisible, while the other two are visible. In the first coming he was seen on earth, dwelling among men; he himself testifies that they saw him and hated him. In the final coming all flesh will see the salvation of our God, and they will look on him whom they pieced. The intermediate coming is a hidden one; in it only the elect see the Lord within their own selves and they are saved.”

Whether anticipating the Incarnation or Second Coming, hope is Advent’s indisputable theme. Pope Benedict XVI (as Joseph Cardinal Ratzinger) once reminded us of this hope saying,

“Advent is concerned with that very connection between memory and hope which is so necessary to man. Advent’s intention is to awaken the most profound and basic emotional memory within us, namely, the memory of the God who became a child. This is a healing memory; it brings hope. The purpose of the Church’s year is continually to rehearse her great history of memories, to awaken the heart’s memory so that it can discern the star of hope…It is the beautiful task of Advent to awaken in all of us memories of goodness and thus to open doors of hope.”

Perhaps, most moving are the abbreviated words on the wonder of hope by Catholic writer/poet Charles Peguy in The Portal of the Mystery of Hope,

“The faith that I love the best, says God, is hope.

Faith doesn’t surprise me.
It’s not surprising.
I am so resplendent in my creation.
In the sun and the moon and in the stars…

Charity, says God, that doesn’t surprise me.
It’s not surprising.
These poor creatures are so miserable that unless they had a heart of stone, how could they not have love for each other.
How could they not love their brothers…

What surprises me, says God, is hope.
And I can’t get over it.
This little hope who seems like nothing at all.
This little girl hope.
Immortal.”

And so in Advent – the vitally necessary Advent – as the “black dog” prowls, the days grow dark and the chill wind blows yearning to snuff out the four Advent candles, do I hope? Do I dare to hope? Yes. Yes I do. Thanks be to God. 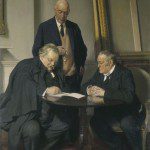 December 7, 2013 Old Friends
Recent Comments
0 | Leave a Comment
Browse Our Archives
get the latest from
Catholic
Sign up for our newsletter
POPULAR AT PATHEOS Catholic
1