Manning, Brady & the Little Secret of the Big Game

That’s how it began…To all my married male friends out there, you know what it means when your wife utters these four words. Something big is about to happen. Perhaps what follows the pause is something like, “It’s time to start looking for a new house” or  “Let’s undertake a major landscaping enterprise” or “We need to purge our house of the junk that you, dear husband, have kept for too long.”. Yes. When my wife (like so many other wives out there) begins a sentence like this, here comes the bigness.

It was perhaps two months ago when it happened. Watching Peyton Manning (and if you haven’t, please read my previous post ‘Regarding My Wife & Peyton Manning’ for some background on my wife’s affinity for good ol’ number 18) and the Denver Broncos win yet another victory, my wife did some quick calculations and said from across the room,”You know, if Denver keeps playing like this, it is very likely that they will host the AFC Championship.” I looked up from my book, having learned to watch football with one eye and read with the other. “Huh”, was my brilliant reply. Pause. And then she mused,

There it was. And then she went on,

“Maybe we should go to it.”

Obviously, there were still many games to play and variables to consider. But two weekends ago, we found ourselves watching with glee as Philip Rivers and the San Diego Chargers fell to the Peyton and the “United in Orange” Denver Broncos. Within one hour my wife had talked with her sister in Denver, booked plane tickets and bought lower deck seats on the thirty-five yard line at Sports Authority Field at Mile High Stadium. We were heading to Denver.

Now, mind you, I love sports. But my wife is rabid about them, especially professional football. My enthusiasm is sound, but hers is downright infectious. Put Cari into a room full of vigorous, robust men jawing about sports and woe-betide the poor dolt who tries to outsmart or impress her. She will eat you up, little man. So this trip to Denver was not simply a lark. Rather it was, dubbed by my wife, on her bucket list.

By week’s end, the time had come. We were packed, airborne and anxiously anticipating the game of a lifetime. Now, I had some misgivings. Professional football doesn’t always bring out the best in people. That’s no secret. Fans can be drunk and vulgar. Players can be arrogant and inappropriate. Additionally, there is no shortage of conventional wisdom which tut-tuts about our society idolizing athletes while affording them fame and fortune over an ultimately meaningless game. This is the “insightful, enlightened view” of sports. And, yes, there’s an element of truth that sports which lose all bounds and context risk becoming a form of empty idolatry. Yes, of course. This is possible.

But, let me tell you about my experience. It was different. We rode the light rail to the drop-off about a quarter mile away from Sports Authority Field at Mile High Stadium. On the way there, the rail car became increasingly congested with bright and eager Broncos fans. There was orange everywhere. And then, in walked a shorted bearded man with a Tom Brady jersey on.

Instead of bristling and drunken chest puffing, he puckishly yelled, “I’m friendly! I come in peace!” and there began an enjoyable give-and-take between Broncos and Patriot fans mutually admiring one another’s passion for the sport, while agreeing to disagree on who is the better team.

After a short walk surrounded by drum-players and saxophonists, water hawkers and T-shirt vendors we arrived at the stadium. There was an exuberance in the air. It wasn’t rowdy or rude. It was eager and fun. While our daughters weren’t with us, I would have felt comfortable having them there. And then we entered the stadium and approached the field. This is what I saw, 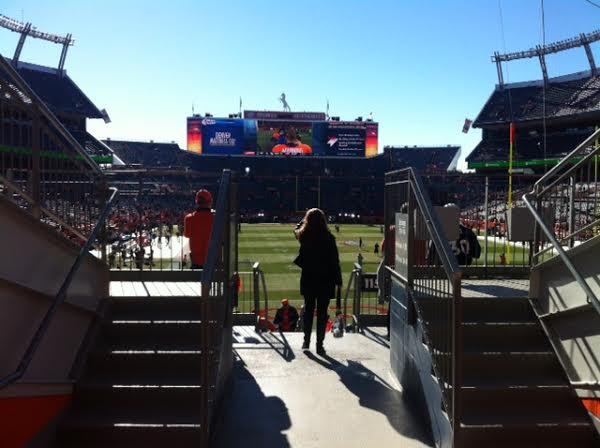 My beautiful wife, nearly stumbling into the light while shielding her eyes, took it all in. Cari had arrived. (Please note the presence on the video screen. I assure you, my wife did.) Perhaps one of the greatest match-ups Cari could imagine, she would now be seeing in person. What was she planning to see? Two iconic, Hall of Fame shoe-in quarterbacks and rather decent human beings, Peyton Manning and Tom Brady, would compete in an indisputably pivotal game – the AFC Championship. For Tom Brady, it was to see if he could lead the Patriots to their sixth trip (under him) to the Super Bowl and a fourth win, show his viability as an aging quarterback, and defeat the player he is most compared to, Peyton Manning. For Peyton Manning, it was to cap off a season of wonders (highest scoring offense, most touchdown passes in a season, highest total passing yards), shake the ghosts of post-seasons past, incidentally demonstrate his value to an Indianapolis Colts management that may have forgotten it, and prove that he has the chops to beat Tom Brady all while pulling off an inconceivable comeback from cervical spine surgery. Who knows if and when these two would meet again when the stakes would be so high? This is what we came to see. And Cari couldn’t stop smiling. 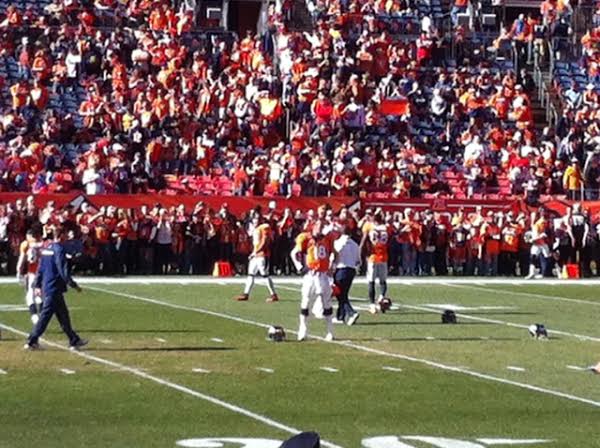 Peyton Manning during pre-game warm up

The game went by quickly…and perfectly. A delightful couple and their three-year old from Texas sat next to us. They came for the playoffs last year and were devastated by the loss. Their little girl slept in their lap. They were perfect neighbors. A man from Alberta, Canada came to the game because he was in town for business and bought tickets off the street. He came alone, lamenting that he couldn’t bring his son due to a lack of available flights. But he bought him a jersey and promised to tell him all about it. Middle-aged men high-fived us on the great plays and groaned on bad ones. A spilled pop caused napkins to generously come from all angles. The sun was warm, but the breeze was cool. The lines were short. The beers were cold. The cheering was passionate, but the language was kind. 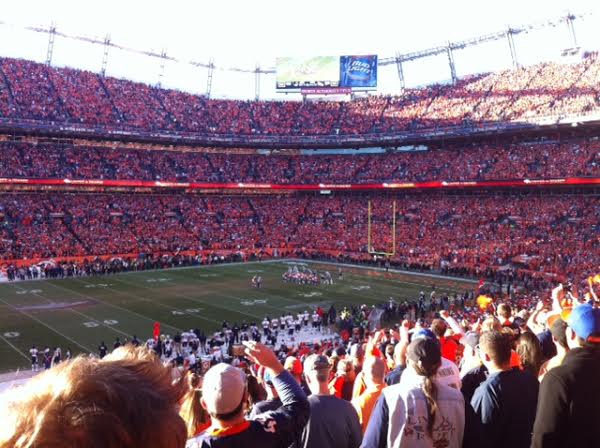 The last play of the game

The game ended. The Denver Broncos beat the New England Patriots, 26 to 16. In spite of the stakes for each team, Brady and Manning shared a gracious handshake and the speeches by owner, coach and players alike were full of class and respect. I looked at my wife and she smiled. And I smiled too.

You see, I know all the negativity there is about sports. I know. I know. All one had to do was watch post-game press conferences to get a taste of it. But do you know what? I didn’t see it, I didn’t feel it, and I didn’t experience it at this game. I felt surrounded by eager, passionate fans – Bronco and Patriot – who were inspired by two great teams led by two great leaders. I sensed a community of people, who for just one afternoon, wanted to forget about their mortgages, their illnesses, their jobs and their stresses. I imagined innumerable fans in the stadium (and, I am sure, millions at home) who understood the incredible competition unfolding before us. And while we watched this, for a time, we all just wanted to be. We wanted to hope. We all just wanted to smile. As Thomas Merton once articulated,

“Art enables us to find ourselves and lose ourselves at the same time.”

I would reason that this can apply to sports as well. That’s the little secret of the big game. Its not hard to see what’s wrong with sports…but it is so gratifying to, at times, see just what is right with them. Thank you, Peyton Manning. Thank you, Tom Brady. Thank you, Cari.

January 16, 2014
Not Missing the Sacramental Journey: Hilaire Belloc's "The Four Men"
Next Post

January 25, 2014 A Lullaby from God: My Lunch with Bruce Springsteen
Recent Comments
0 | Leave a Comment
"Nice article. But true as it may have been then, it is today a little ..."
DWSWesVirginny The Conversion of Evelyn Waugh & ..."
"Thank you. I find this article a good one to keep in mind tha argument ..."
Lady Bird What Pope Benedict XVI & G.K. ..."
"Gotta wonder how much of his idealization of children would have survived if he had ..."
The Sanity Inspectorن​ All of Chesterton’s Children
"I have been reading "The Four Men" every year at this time, late October. This ..."
P. O'Brien Not Missing the Sacramental Journey: Hilaire ..."
Browse Our Archives
Related posts from A Catholic Thinker