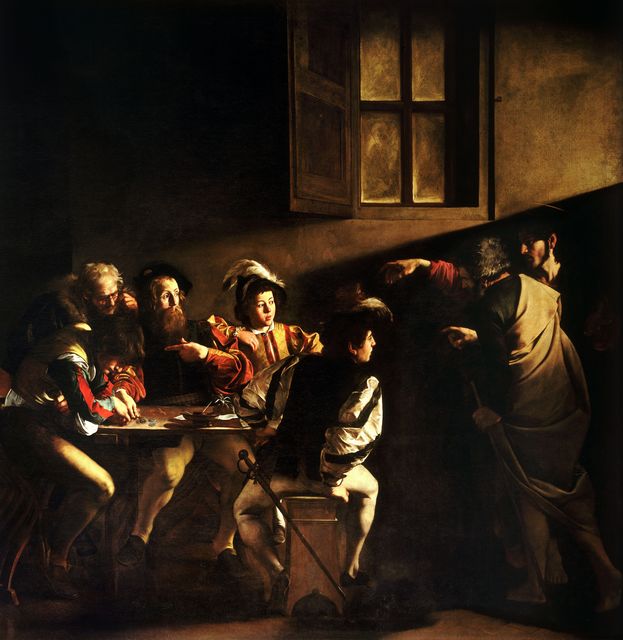 The Calling of St. Matthew by Michelangelo Merisi da Caravaggio

When I was growing up, I was raised in a Lutheran home. My mother’s father was a gifted, but somewhat stern Lutheran pastor who informed my mother’s faith. We attended church regularly, prayed at meals, prayed before bedtime and read stories from “Hurlbut’s Story of the Bible”. I recall close friendships between my parents and our pastors. I remember walks with my dad down long train tracks, as our black lab manically sniffed for pheasants, where he would look at the endless starry skies and say, “This all didn’t simply come out of swamp gas.” And deep down, even childhood decisions, as immature as they were, always felt like they were accountable to God and family. Do as you would be done by. Love your neighbor as yourself. Those to whom much is given, much will be expected.

My faith, I would like to think, has always been strong and my relationship with Christ has grown deep (in spite of my missteps and imperfections). But curiously as I grew older (and even after converting to Catholicism), I encountered a world that wanted to tell me that it was time to truly “grow up”. Religion is a myth. A fairy tale. A lark promising to explain the inexplicable while surreptitiously corralling free spirits. Professors in college, columnists in smart, fashionable magazines, authors of well-praised books sought to disabuse me of my “simple” notions of faith. Surely in the age of the Human Genome Project and the internet and space travel and evolutionary psychology – surely, it was time to retire the well-worn security blanket of God, to be finished with this quaint, silly, ridiculous, little faith and march forward as a liberated adult into the dazzling freedom of autonomy, personal fulfillment and assured happiness.

But I am not so sure.

You see, the myth, the fairy tale, the lark I believe in says something just a bit more complex, offers something a touch more extraordinary, presents something a whiff more brilliant than the cardboard cut-out caricature of faith erected by its haughty, “enlightened” skeptics. In fact, it has always struck me that the most vocal critics of faith never seem to be talking about any faith that I have ever known or practiced. Perhaps in the midst of their considerable wisdom and insight, there are a few things these skeptics should honestly consider. Here is what I have found in my faith.

In my faith, I have found that we are dignified – there is a deep respect for the special role of man (and woman). No matter the astounding killer whale tricks and dolphin training and ape language and pig appreciation paraded about on the Discover Channel, there is something deeply jarring about humanity when compared to all other living creatures. We build spaceships and dive to the bottom of the sea. We make music like Mozart and pen sonnets like Shakespeare. We walk through museums just to look at things because they are beautiful. We take pictures and smile or grow wistful when we happen upon them years later. We are moved to tears at just the right music at just the right moment during just the right movie. We shake our fists and write our Congressmen/women and blog and give lectures and wear sandwich boards on street corners over abstract, but palpably important concepts like freedom, justice and equality. We dream big dreams for our children. We aspire to greatness in our youth and surrender childish things in our twilight. We love. We regret. We hope. These are not things that other creatures do (at least not in a convincingly comparable fashion). Yes, we have anthill hierarchies and Jane Goodall specials and likeable dogs manipulating us for our errant table scraps, but no one can convincingly claim that any of our attempts to assign them deep philosophical, sociological and theological significance can conceivably rival that seen in even our dullest of friends. And what’s more, this can’t all be explained as the mindless deterministic product of neurotransmitters and hormones, gene proteins and chemical reactions. C’mon. We know we are something more than that. This is about dignity – imbued, imparted, gifted to us by something larger and more brilliant than us. My faith is the faith of Jews and Gentiles, peasants and Kings, lepers and beauties, wise men and simpletons. Human beings, glorious creations that are special…well, special simply because they exist.  We are dignified.

In my faith, I have found that we are called. Why do we feel the need to change the world, to make amends, to finish what we started, to say that last goodbye, to give that goal yet another try? Why do we spend hours in practice, years in study, decades in work with eyes on a goal, a role, an accomplishment? Why can’t we just sit still and “be” without ultimately feeling a deep, unsettling restlessness? Because time is fleeting, we are aging and we are called to something. We watch movies, read books and enjoy poems that have a plot, a direction, an aim. Whether the Wizard of Oz or Harry Potter, Breaking Bad or House of Cards there is a dignity (however preserved or tarnished) inherent to the central figure of the story and a purpose particular to the journey they are on. There is a calling. My faith is the faith of a man called to build an ark, a shepherd boy called to be a king, a ne’er-do-well called to warn a city, a peasant called to mother the Christ, a fisherman called to build the Church, and a Pharisee called to convert the world. The calling may take us where we don’t want to go, for reasons that aren’t completely known, at a cost we aren’t sure we want to pay. But in the end it is clear…and glorious. We are called.

In my faith, I have found we will suffer. Those who criticize faith as a fairy tale seem to have conveniently forgotten one central fact of fairy tales: there is true evil and often wicked suffering that occurs in them. This is anything BUT unrealistic. And the central challenge of the fairy tale figures that endure the suffering is to maintain their dignity and answer their calling (remain steadfast on the journey) regardless of the cost. But suffering is a very real part of every life. Fear, anxiety, guilt, pain, loss and death shade everything we do. And yet who can speak eloquently to this? My faith can. My faith is the faith of a mocked ark builder, a King racked with guilt, and a leader dying shy of the Promised Land. My faith is the faith of a mother silently beholding her perfect, yet brutalized and dead Son, a fisherman blackened by impulsive and irretrievable betrayal and disciples martyred as the playthings of tyrants and mobs. My faith is the faith of the Passion and the Paschal Mystery. Should we expect to suffer any less? We will suffer.

In my faith, we will find grace. There is a good end. As inconceivable as it may seem, as unrealistic as it may appear, as overwhelming as the suffering may be, there is a deep sense that things should be fair, should be just, should be made right…that things will be made right. Why do we feel that way? Because we have all experienced moments of Grace in our lives. Piercing, transforming, illuminating moments of Grace. And they feel brilliantly as things should be. These are moments of unearned, unanticipated blessing that are as glorious as they are inexplicable. We are called to be Agents of Grace to those around us. Grace is seen in firefighters running into a burning World Trade Center as others are running out. Grace is evident in the remains of a mother in Pompeii bodily surrounding and shielding her toddler from the fiery carnage raining down. Grace is listening one moment longer, giving one extra measure, and forgiving one more transgression even though our pride and impatience counsel otherwise. Grace is the Sign of the Cross and the moment of Absolution as we step away from the Confessional. My faith is the faith of Grace. It is the faith of healing and forgiveness, of lost sheep found and prodigal sons returned, of the Exodus and the Incarnation. It is the faith of Christ our Friend, Christ our Teacher, Christ our Saviour. We will find grace.

And so, my skeptical friends, this is my faith. And it is extraordinary.

In Evelyn Waugh’s classic novel, Brideshead Revisited, the agnostic Charles Ryder engages his friend (the flamboyant and Catholic Sebastian Flyte) in a conversation about faith.

Charles: “I suppose [the Catholic Church tries to] make you believe an awful lot of nonsense?”

Sebastian: “Is it nonsense? I wish it were. It sometimes sounds terribly sensible to me.”

Charles: “But, my dear Sebastian, you can’t seriously believe it all?”

Charles: “I mean about Christmas and the star and the three kings and the ox and the ass.”

Sebastian: “Oh yes, I believe that. It’s a lovely idea.”

Charles: “But you can’t believe things because they’re a lovely idea”

Sebastian: “But I do. That’s how I believe.”

Is it nonsense? No. Actually, it sounds terribly sensible to me.

In fact, it is a lovely idea. 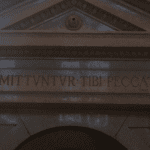 March 15, 2015
Why That Woman Wept At Confession
Next Post

March 25, 2015 On Catholicism & Atheism...My Dogma & Yours
Recent Comments
4 Comments | Leave a Comment
"Thank you. I find this article a good one to keep in mind tha argument ..."
Lady Bird What Pope Benedict XVI & G.K. ..."
"Gotta wonder how much of his idealization of children would have survived if he had ..."
The Sanity Inspectorن​ All of Chesterton’s Children
"I have been reading "The Four Men" every year at this time, late October. This ..."
P. O'Brien Not Missing the Sacramental Journey: Hilaire ..."
"Regular updates to the countdown to the Day of the Lord by the sign of ..."
Edward Palamar “Something Absolutely Modern” – The Insincere ..."
Browse Our Archives
get the latest from
Catholic
Sign up for our newsletter
POPULAR AT PATHEOS Catholic
1