Ben Franklin said there are three things that are extremely hard. “Steel, a diamond, and to know one’s self,” but Sun Tzu tells us in The Art of War, “know […] thyself, and in 100 battles you won’t be destroyed.” A proverb written above the door at the temple of Delphi, and often parroted in Pagan communities, it remains good advice. In Witch, Know Thyself, Phoenix LeFae suggests therapy, self improvement, and checking your motivations, as good places to start on the path to knowing who you are. I’d add that you should create a personal code, and establish an area of expertise.

Part of the Coven of Leaves experience

One of the first things that I ask of new students prior to initiation, is that they declare an area of specialization. This is a struggle for some. Being asked to distill your magical practice, and perhaps yourself, into one area of interest is no small task. So why do it? Because I believe that it’s important to have focus, and that we have a clear understanding of not only our “lane” but the role we serve in our community.

What’s wrong with doing a bit of everything?

Being a Pagan in the age of social media, content creators, influencers, means often being inundated with information against which we subconsciously  measure ourselves. Through content, Big Name Pagans and influencers tell us every day what kind of practitioners they are, and subtly, who we should also be. Sometimes though, I confess to wondering what they are, and what their area of expertise is.

I know that Mat Auryn an accomplished psychic; Morgan Daimler the foremost authority on Daoine Maithe; and Misha Magdalene, an expert on issues surrounding gender and sexuality in magical and occult practices. Hopefully people see me as something resembling knowledgeable about death since being a embalmer/funeral directrix, medium, and practicing necromantrix, are a major part of my life. But what of those with a massive followings, who have no discernable expertise? I can’t help thinking that we have a lot of influencers who seem to just be experts in being magical. Universalists as it were.

In Dungeons and Dragons (oh no, again with the nerd stuff) there are schools of magic that typically, a player portraying a magical character must choose from as their specialty. Someone who specialized in evocation, for example,  would be really great at fireballs and burning things, but maybe not so great at illusion – hard to be subtle when you’re blowing things up I guess.

There are some, however, who instead of a school choose universal. It’s sort of like being a wizard who specializes in, well, being a wizard. On the surface able to do a little bit of everything, they lack focus, and wind up with pretty mediocre skills. Sometimes, I think to myself, that we have a whole bunch of folks out there who seem to just be specializing in… witch.

In addition to Delphi, Ben Franklin, Sun Tzu, and a whole host of others, “Know thyself,” is also a phrase that turns up in the ancient play Prometheus Bound. In it, Prometheus rails against the Gods – particularly Zeus, believing his punishment to be unfair. You see, Prometheus had stolen from the Gods, taking the spark of fire and giving it to mankind; and Zeus, being the generally chill guy that he is chained him to a rock and let eagles eat his liver forever. But Oceanus tells Prometheus know thyself – a big ol warning to be aware of his place in the story.

Illuminate your truest self

In ancient Rome, the liver was symbolic of one’s intelligence and was the part of the body examined to foretell the future. It’s no surprise then that it was Prometheus’s liver that Zeus’ eagles pecked at for eternity. For it was not stolen fire that angered the Gods – but that spark of knowledge from which all technology would spring, becoming all the things that humanity would one day come hold up in place of the Gods themselves. A prophecy written in Prometheus’s liver.

It is my hope and belief, that what the vast majority of Pagan content creators do, they do largely in service to their Gods. To something greater than all of us. But let us not be tempted to worship at the altar of technology or of fan bases, but instead to use that divine spark to illuminate our truest selves. To know who we are, and what we have to offer our fellow man. Let us not steal fire from the Gods, but instead, know ourselves, lest we be lashed against the rocks of ego.

So, what have you used your divine spark to illuminate? What is your area of expertise? 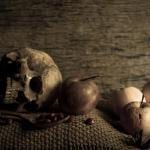 August 21, 2020 Dear Mortellus: Venerating Disapproving Ancestors
Browse Our Archives
get the latest from
Pagan
Sign up for our newsletter
POPULAR AT PATHEOS Pagan
1

Magical Pictures on My Office Wall
It never occurred to me to bring pictures to work. When I...
view all Pagan blogs
Copyright 2008-2021, Patheos. All rights reserved.