Ortigia, the island off the coast of Syracuse in Sicily (Italy) is as Strabo wrote ‘utterly mythical’.  It is one of the principal candidates for the location of the birthplace of Leto’s twins, Apollo and Artemis. It is home to a Roman Catholic Duomo (Cathedral) within which is encased a complete temple to the warrior goddess Athena; as well as the spectacular ruins of one of the most ancient Temples of Apollo and the secretive ruins of an Artemision, temple to Artemis.

During the more than 2 weeks I stayed there, I spent lots of time exploring the island and speaking to both visitors and locals. Along the way, I had some incredible experiences, which included meeting a man so dedicated to Apollo that he had transformed his substantial palazzo into a shrine to the God. Here he spoke to the God (who was sometimes reclining, clad in gold, on a sofa) and created spaces for others to do the same. And yet still in a trance-like daze he professed to be Catholic with not even a vague knowledge that there are still people actively worshipping the God. This is a mythic place where time continues to stand still, even though cafés offer free wifi and a few designer brands have flagship stores next to boutiques filled with beautifully handcrafted goods and perfumes and the daily market which in itself is enough to make this tiny island sufficiently unique to visit!

One of the most famous myths associated with the island is that of the nymph Arethusa. In her efforts to escape the unwanted attention and desire of the river God Alpheios, Arethusa called to the Virgin Huntress Artemis for help. Artemis transformed Arethusa into a spring to help keep Alpheios away from her – but the story, which is beautifully recounted by Strabo in his Geography, does not end there:

“The Island of Ortygia [Syracuse, Sicily] . . . has the fountain of Arethusa, which sends forth a river that empties immediately into the sea. People tell the mythical story that the river Arethusa is the Alpheus, which latter, they say, rises in the Peloponnesus, flows underground through the sea as far as Arethousa, and then empties thence once more into the sea. And the kind of evidence they adduce is as follows: a certain cup, they think, was thrown out into the river at Olympia and was discharged into the fountain; and again, the fountain was discoloured as the result of the sacrifices of oxen at Olympia. Pindaros follows these reports when he says: ‘O resting-place august of Alpheios, Ortygia, scion of famous Syracuse.’ And in agreement with Pindaros Timaios the historian also declares the same thing. Now if the Alpheios fell into a pit before joining the sea, there would be some plausibility in the view that the stream extends underground from Olympia as far as Sicily, thereby preserving its potable water unmixed with the sea; but since the mouth of the river empties into the sea in full view, and since near this mouth, on the transit, there is no mouth visible that swallows up the stream of the river (though even so the water could not remain fresh; yet it might, the greater part of it at least, if it sank into the underground channel), the thing is absolutely impossible. For the water of Arethousa bears testimony against it, since it is potable; and that the stream of the river should hold together through so long a transit without being diffused with the seawater, that is, until it falls into the fancied underground passage, is utterly mythical.” – Strabo, Geography 6. 2. 4, trans. Jones.

Watching the gushing fresh water emerging on the far end of this island, which is nearly entirely made from rock and which has little in the way of vegetation, knowing that the drinkable water it was gushing forth must originate from a very far way away, was incredible. Seeing it flow forth into the salty ocean water just a few meters away was breathtakingly magical . One can see the pressure at which the fresh water emerges from the spring, pushing the salt water of the ocean before mingling with it.

It is possible to visit the source of the spring by paying a small fee to visit the aquarium, and walking through it to the water level of the spring (which is several meters lower than street level). There you can reach out and taste the water before it enters the pond and flows into the ocean, and marvel at both the incredible magic of it all. But its not all magic. Be warned, the aquarium is possibly the worse I have ever visited, fish are kept in tanks which are poorly maintained, dirty and often too small. The pond is inhabited by numerous waterfowl, which can be feisty when their routine is interrupted. You can see the fresh water fish, which in antiquity were considered sacred to Artemis; and the lush Papyri growing in the spring adds yet more flavours to an already thick mythic blend.

When it was time to leave, it was Arrivederci, not good bye.  And if you get the chance, go – explore the ancient streets and breathe in the magic! 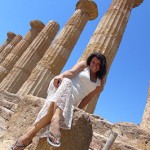 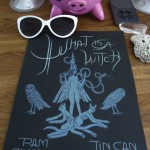 June 13, 2016 What is a Witch?
Recent Comments
0 | Leave a Comment
"This is a good article and book. Blessed be! :)"
Viktor_Aradia The Morrigan – Faerie Queen
"I'm sure Freemasonry also has a lot to learn from Wicca (Witchcraft) too. :)"
Viktor_Aradia Payam Nabarz – Children of Earth ..."
"Thank you! His work is very interesting, so do!"
Sorita d'Este Payam Nabarz – Children of Earth ..."
"Thank you Merit - if you remember let me know. There are variations, of course, ..."
Sorita d'Este Is She the Crone? Hekate’s Profanation?
Browse Our Archives
get the latest from
Adamantine Muse
Sign up for our newsletter
POPULAR AT PATHEOS Pagan
1

No, That's Not An Odal Rune
The Zen Pagan
Related posts from Adamantine Muse 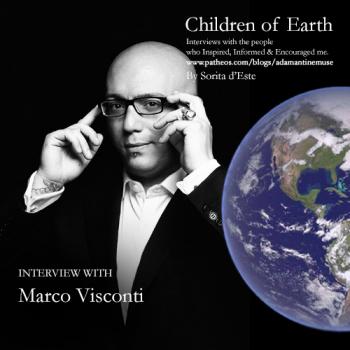