Early in the morning at a recent conference, I deliberately decided that when lunchtime arrived, I was not going to eat dessert.

I wanted to be sharp that afternoon. I was scheduled to interview an author, and I didn’t want a big glop of sugar muddling my system.

Lunchtime arrived. I expected to eat buffet-style, where you pick and choose what you want. Instead, we 350 attendees bellied up to roundtables. The caterers plunked the main course down in front of us, pre-plated, like your mother would do. Eat up, son.

Dessert was served the same way. A slice of cheesecake was slid in front of each attendee. The caterers were running at full-tilt. No option to decline was offered.

I stared at that cheesecake in front of me. I stared hard. I hadn’t chosen it, and I’d already made a deliberate decision to say no. But the whipped cream looked so smooth. So velvety.

I ate the cheesecake.

In the heat of the moment, a man’s logic doesn’t work as well as he thinks it will. His brain shuts off, or he’s tired and wants a pick-me-up, and the deliberate decisions he made in cooler moments tend to be forgotten. What then?

Fast forward 11 hours. The conference was over, my interview was done, and I drove back to my hotel room in the rental car. I reviewed my notes, called my wife and said goodnight, and settled in to watch some TV before sleep.

Now, before I had ever arrived in that hotel room, I had deliberately decided that I wouldn’t watch anything harmful on TV. Visual garbage is not a chosen part of my life. It muddles my relationship with my wife, wastes time, and destroys self-respect.

But when I turned on the TV in the hotel room, the regular channels didn’t come on at first, as they seldom do anymore in hotel rooms. A screen came up—and the option staring me straight in the face was for adult channels.

I stared at that option like I’d stared at the pre-plated cheesecake. I stared hard. I hadn’t chosen the adult channels, and I’d already made a deliberate decision to say no. But the option had been set right in front of me, and I am red-blooded like any male.

Have you ever been there?

Well-meaning leaders are quick to say that sheer will-power is the key. A man always has the option to say no. So grit your teeth dude, and turn it off.

But a recent New York Times article showed that sheer will-power isn’t all it’s cracked up to be.

Will-power is actually a limited resource, the study found. Will-power gets depleted throughout the day, and the more stressed we are or the more decisions we make, the less self-control we have come evening.

That’s bad news for a man alone in a hotel room.

A wise leader prepares in advance, while his logic is still sharp, for the moments in the future when his will-power inevitably won’t be as strong. He uses his will-power, yes, but he’s wary of it, too. He knows it can be depleted, so he plans ways to make it as difficult as he can for his illogical self to take him down wrong roads.

It’s the same principle as that used by a man who turns over his keys to a designated driver at the start of a party, not the end.

I use a family filter called Covenant Eyes on all my computers. It’s about $5 per month, and sometimes means a slight inconvenience, but the service is well worth it—not just for me, but for all members of my household.

Having a family filter is a sign of strength, not weakness. A man wants to safeguard what’s valued.

Use a safer search engine.

If you want bells and whistles–and a whole host of unwanted CRAP–then by all means use Bing, Google, or any of the main search engines. But if you want a safer family friendly search engine that’s free, use K9 SAFE SEARCH.   Find it at: http://www.k9safesearch.com/

Since we have younger kids in our house, we use it on all our family search computers. I even use it on my work computer. It’s got automatic filtering built right in, and I’ve found it to be a great little search engine that brings up everything of value.

Whenever I travel by myself, I’ve set up an accountability system where I phone a trusted friend after the trip and we talk through any integrity issues. I’ve given this man permission to ask me any hard question, and I’ve vowed to always answer honestly.

Again, that’s strength, not weakness. The decision is rooted in a desire for integrity.

That night after the conference, fortunately I flipped channels and didn’t watch anything harmful on TV. For that moment, my will-power worked, and I had the good sense to move on, no matter how tantalizing the dessert might have looked.

I don’t say that to pat myself on the back. And not every decision I’ve made has been as wise.

I say it because this is every man’s battle, and I’m with you in the fight.

The perfect book for a summer read:

The authorized biography of Sgt. Darrell “Shifty” Powers, the legendary sharpshooter from the Band of Brothers.

June 28, 2013
Sex Education—Why Parents are the Best Teachers
Next Post 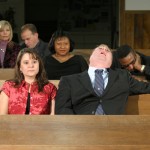 July 3, 2013 Can a man love God but hate churchgoing?
Recent Comments
0 | Leave a Comment
Browse Our Archives
get the latest from
Family
Sign up for our newsletter
POPULAR AT PATHEOS Family
1