A few weeks ago I posted a photograph of Mark Driscoll on the Church for Men Facebook page. The Seattle preacher was driving to church in a hearse, wearing funeral attire to publicize his sermon series and his new book, “Will Christianity Have a Funeral or a Future?”

The reactions from my readers were mostly negative. “Gimmicks,” “Crap,” & “Ear Tickling,” were among the responses to the photo and story. The comments section beneath the original article was equally scornful of Driscoll’s “shameless publicity stunt.”

There’s a perception among longtime churchgoers that the only acceptable way to teach or publicize the message of Jesus is a straight, verbal sermon with no visuals, no metaphors (unless they’re spoken) no modern media, and of course, no humor. Any attempt to communicate our faith using props, videos, skits, or other non-verbal tools is often dismissed as “dumbing down the Gospel.”

Why do we believe this? Why is it wrong for a preacher to do something visual to drive home a point? Why can’t Christian teaching be delivered in a creative, memorable way that gets people talking? Why are mouth-to-ear and book-to-eye the only two acceptable paths for Christian teaching?

Perhaps Martin Luther is to blame.

Early Protestants were men of the Word. They distrusted Catholicism with its highly visual worship spaces festooned with icons, statues, candles, stations-of-the-cross and stained glass.

Protestant reformers took to heart Romans 10:17: Faith cometh by hearing, and hearing by the Word of God.  They created austere worship spaces with minimal adornment. Clapboard sanctuaries and hard wooden pews were standard in the Puritan era. The sermon became the centerpiece of worship, pushing aside the Eucharist (the most sensual of the sacraments).

The spirit of Puritanism lives on in many longtime believers. There’s something in our hearts that causes us to suspect anything in church that delights the eye or makes us chuckle. A voice in our heads whispers, “It must be of the Devil.”

After all, we are at war. What place do humor, levity, parody, art or entertainment have when souls are perishing all around us? Such things distract us from the seriousness of our calling. They shine the spotlight on man, not God.

We can follow this line of reasoning to its logical end point – Pharisaism. Pretty soon we’ve squeezed every bit of creativity, beauty and whimsy out of our faith – and we harshly judge anyone who tries to communicate the gospel in an innovative way.

Now I fully realize that there are a lot of gimmicks at work in the church today. There are plenty of hucksters and con-men deceiving the flock. And there are egotistical preachers who long for the spotlight.

But creative communication techniques are not necessarily from Satan.

Quite the contrary. As I read the Bible, I’m reminded how often God surprises people.

The Bible tells us the crowds were “astonished” at Christ’s teaching. Many times his followers “marveled” at something he said or did. His disciples were dumbstruck when he fed 5K from a lunch pail; when he raised the dead; when he walked upon water; when he transfigured before their eyes. Jesus kept his men in a constant state of amazement.

Nor was he shy about using objects at hand to burn his messages into the minds of his disciples. “Show me a coin!” Jesus shouted. “Behold! The fields are white unto harvest. Look at the birds of the air.” His best-loved teachings are his parables – engaging little stories that never really happened. They’re theater of the mind.

I don’t know if Jesus would preach from a hearse if he were walking among us today. But I do know this – he would command attention. He would draw a crowd. And he would focus his hearers on God. That seems to be exactly what Mark Driscoll is doing at his church in Seattle. I don’t see a gimmick – I see a disciple following in the footsteps of his Lord.

So what do you think? I welcome your comments below, or join us on Facebook.

October 21, 2013
College Men: What You Need to Know About Finances
Next Post

October 24, 2013 Dress Like a Slut
Recent Comments
0 | Leave a Comment
Browse Our Archives
Related posts from A Few Grown Men 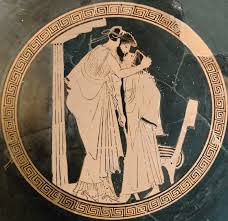 Falling in Love Can be Easy but Staying...
Bailey, 36, and Kevin, 40, sat on my couch for their couples...
view all Family blogs
What Are Your Thoughts?leave a comment
Copyright 2008-2021, Patheos. All rights reserved.
Close Ad