In a Pagan context, a Reconstructionist is one who wishes to re-create ancient practices as closely as possible to what they were prior to the rise of the Abrahamic religions. For most Hellenic polytheists, this means the practices of Classical Greece. Hellenics are very fortunate in that there is a mountain of source material from the writings that survived from that time period to secondary sources by classical scholars and beyond. We have a lot to work from and even though there are sometimes large gaps in what we know, we can still get a fairly good picture of what religious life was like in ancient Athens, Delphi, and even Sparta and Macedonia. I am beyond grateful for these sources and thank the gods that we have them, but though they contain a great deal of information on how the Theoi may have been worshipped at the time, they are not sacred texts in the same way many monotheists think of their holy books. We recognize that these were written by people and they were often very intelligent, inspired people, but they were people all the same and people are flawed.

I propose an approach to worship and practice that I will call “reconstructionist,” but in the sense that we can take the foundation of our religion and build something new that will serve us more effectively in the time and place in which we now live. I now sit 2500 years and 5600 miles/ 9000 km distant from the Athens that built the Parthenon. The Oracle at Delphi spoke her last prophesy almost 1700 years ago. Our ancient temples are not much more than ruins and difficult or impossible for most of us to access. That is an enormous distance to bridge and the world has changed in drastic ways since then.

This alternate concept of reconstructionist practice was derived from Jewish Reconstructionism. In the late 1920’s, a group of Conservative Jews diverged from their congregation with the goal of forming a more modern practice that was still Jewish at its foundation. Halakha became more a part of the honored past than law and modern ideas of equality and social justice took precedence. These congregations are democratic, inclusive, and egalitarian, supporting male and female Rabbis and very broad concepts of the divine. While maintaining Jewish observances and the study of the Torah, Jewish Reconstructionists also welcome new rituals and observances that reflect the needs of modern life.

In Judaism, there was a shift in leadership from the priests to the rabbis with the destruction of their Temple in Jerusalem as the turning point and since then, Judaism has grown and changed to integrate the changes that occurred in the world around them. Old rituals were edited or eliminated while new rituals were added. Interpretation of the Torah is ongoing and it is practically a commandment to challenge the old ideas.

If my fellow Hellenic Polytheists were to take a page from the Jewish playbook, we might find that there is, indeed, a foundation of Hellenic religion upon which we can build a modern practice rather than attempting to re-create what was done 2500 years ago. Our ancestral spiritual DNA can evolve into something more fit for modernity, but to do this, we must determine what the foundation upon which to build our new temples might be. Though some might see our polytheism as a disadvantage in finding unifying principles, I see polytheism itself as a unifying principle. A devotee of Aphrodite may take a different approach to his spiritual life than a priestess of Apollo, but the two can be mutually supportive in the ultimate goal of spiritual health for the whole person. Love of the Theoi alone is often enough to bring us together.

Additionally, it might be possible to unify as a people who wish to attain arete and to avoid hubris. Put very simply, the attainment of arete is a sort of quest for excellence. Though how one defines arete for oneself can be very personal, I often think of those Olympic gold medalists who speak of competing not against their opponents, but against themselves. They attain arete in their sport by working hard toward their personal best. To put it as one of my high school English teachers would say, “Don’t leave the house with your curlers in.” Take the time to take the curlers out and show everyone how fabulous your hair is. In other words, every day and in every endeavor, put forth your best work and shine as bright as you can. Hubris is often emphasized in the literature as what might be considered the deadliest “sin” of Hellenism. Though I believe in mistakes more than “sin” per se, hubris is a pretty big one. Its antithesis, humility*, might then be something favorable that we would collectively want to cultivate with the guidance of our gods. It is the difficulty and personal nature of the journey to balance excellence and humility in our endeavors that could be definitive of what it means to be a Hellenic. Home, family, ethics, service, and sacrifice are all important to Hellenic practice as well and as we seek to bring humble excellence into all aspects of our lives, we will find that our differences in these areas of life are not as great as we may think.

The rituals of Hellenism are as numerous and varied as Hellenics themselves – perhaps even more so. It is here where much contention remains as to what constitutes right practice and here where the idea of reconstructionism (sensu Judaica) can most benefit us. We can accept the old ways as part of our honored past and look to our practice with an eye toward modernity while still maintaining the core values that define Hellenism. The particulars of how to form new practices on this foundation are the topics of future posts and conversations, but I welcome thoughts on what has been stated here. Is this an approach that would work for you? Why or why not?

*My dear friends and colleagues of a more Norse bent find this both puzzling and hilarious. While I accept that boasting is nigh unto a sacred act for them, it is not to be recommended when in the service of the Theoi. 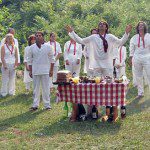 February 14, 2012
Setting the Table: The Importance of Deity in Ritual
Next Post 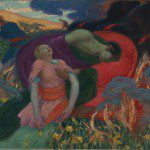 February 14, 2012 What Was Lost: The Story of Spring
Recent Comments
0 | Leave a Comment
Browse Our Archives
get the latest from
Agora
Sign up for our newsletter
POPULAR AT PATHEOS Pagan
1