Setting the Table: The Importance of Deity in Ritual

A little over a week ago I led my first public ritual in California, and received at lot of positive feedback from people I like and respect in my community.  Most of the comments that I got ended up being about the energy present at the ritual (strong and good), and the recitations of the Charge of the Goddess and Charge of the God by my wife and I.  These are not separate things, because it’s always a lot easier to raise energy if the gods are attending your ritual.

In nearly twenty years of Paganism I’ve been to a lot of rituals, and one thing I’ve noticed over the years is how little time many ritual leaders devote to deity.  I don’t think your God and Goddess calls have to take up thirty minutes of ritual time, but they should convey something.  They should be more than just two quickly jotted down lines read with little to no emotion.  I know that there’s often a focus on the rite during ritual, that tricky moment of leading your circle or coven in a magickal working or seasonal celebration, but your rite will go so much easier if you can feel the presence of the Lord and Lady while you are doing it.

When I finished my recent Imbolc ritual I wasn’t expecting any praise, from my point of view it was an average ritual, but I ended up getting it anyways, and my wife and I think it’s because we properly set the table.  What do I mean by setting the table?  To my wife and I it means successfully calling the Goddess and God into our circle, to the point where people feel the energy of the Lord and Lady around them.  It’s speaking to deity with passion, and creating a moment in the circle where everyone is aware of who you are calling to.

I love my gods, I’m passionate about them, I’m also a suck-up, and I have a feeling that the gods like to be flattered.  There’s nothing flattering about mumbling a few words to deity because it’s expected.  Calling to the gods should be an experience people want to have.  In the simplest of terms, it should feel good to say “Maiden, be with us in our circle tonight!” and if it doesn’t feel good, there’s a chance that ritual will be a little less than it could have been as a result.  I don’t think every call to the Lord and Lady has to be full of flowery words and Shakespearean prose, just that communicating with them should be something people feel, and that feeling should be something others can pick up on.

One of the easiest ways to really draw in deity during ritual is by reciting a Charge.  A charge is a first person revelation on the nature of deity.  The most famous charge in all of Pagandom is Doreen Valiente’s Charge of the Goddess, and in my mind there’s no more powerful piece of liturgy in all of Paganism than that charge.  You want to feel the Goddess in your ritual?  Then read Doreen’s Charge, and don’t be surprised to feel a little tingle of energy while you do so.  When I hear the words “and ye shall dance, sing, feast, make music and love, all in my praise.For mine is the ecstasy of the spirit and mine also is joy on earth; for my Law is Love unto all Beings” I know that She’s next to me.

Unfortunately, there is no “Charge of the God” equal to Valiente’s Charge of the Goddess.  There are several God Charges available, all with various strengths and weaknesses.  Some of them are re-workings of Valiente’s Charge, but from a male point of view, and they tend to use language and pacing similar to Valiente.  Other versions are unique, and have found inspiration in other sources.  It must have originally been during a bout of massive ego, but I wrote my own Charge of the God years ago and have used it in ritual ever since.  You may not find the words “I am he that stands at the threshold of death, and life eternal.  I welcome those who have departed your world and bid farewell to those who return to it.  I guard the mysteries of the end and the wonder of beginnings.  I am the Great God,” transformative, but it works for me.

In some ways using a charge is like using a short-cut (or as my wife calls it, “cheating.”)  If it’s a charge familiar to a lot of people, it will automatically conjure up positive memories of rituals past.  It’s a way to tap into something bigger than your ritual, it’s a connection to the thousands of rituals that have used those words.  I think it’s always important to “create new” from time to time, but there is a comfort in the familiar, and a connection there that can instantly put someone in a space where they can commune with the Lord and Lady.  That doesn’t always have to be a charge either, it could be a chant or a specific action, but in large, public, group ritual where not everyone has worked together in the past, Valiente’s Charge is the easy option.

What’s the point of all this reading and talking?  It’s to call the Gods and have them present in ritual.  You may not always be in a position to Draw Down the Moon, but there’s no reason why the presence of the Gods should be absent.  Having deity present at ritual makes everything easier too, because once you have them there you are working from a position of strength.  When people say  to me “I felt energy at your ritual,” it’s because there was energy in the ritual long before we tried to raise any or do a working.  Having deity present lays a foundation for all that comes afterwards, this is why my wife calls it “setting the table.”

Why was Beltane awesome?  Because the Maiden was there, preparing for Womanhood, and that energy was something everyone in the circle felt and experienced.  The energy that the gods bring to ritual is very real, and the truth of the matter is, it doesn’t always take a whole lot of work to receive it.  You don’t have to dance, you don’t have to sing, and you don’t have to drum, you just have to be open to the call of deity, and have the desire to share that experience with others.  Deity wants us to be successful when we have a ritual, deity wants to participate, it’s simply waiting for the invitation, and when deity shows up, ritual is all the better for it. 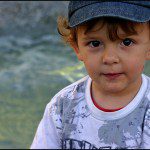 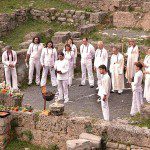