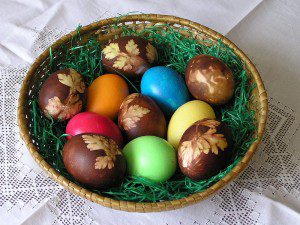 The teenage girls are hunting for eggs in my parents’ yard. They pick through the splendidly overgrown vegetation, snatching at bright colors, and calling out to one another whenever they find one. But they are in a difficult position: their age demands a certain jaded attitude towards all things, so they can’t seem too excited, especially over something as childish as hunting for Ostara eggs.

One of the girls picks up a bright red egg that had been hidden inside of a bucket containing a candle. The words “SOUTH” and “FIRE” are etched on the egg in yellow crayon.

“You found one of the elemental eggs,” I say when she walks over to me.

“Yeah,” she says. “It was really easy to find,” she adds, knowing that I was the one who hid it. She is determined that I understand she is not impressed with either of us.

“So are you going to call the quarter, then?”

“I found two!” calls one of her companions, and she goes back to hunting.

Of the four quarters being called at this ritual, half will be called by members of the covey of teenage girls, and another by my girlfriend, who has been coming to sabbats with me for some time now, but considers herself agnostic more than anything. The three of them have never called a quarter before. (The last is called by Amy, who has been with us for years.) It’s impossible to know whether or not this will lead to more involvement from them – whether this will encourage them to stay active in our group, someday playing bigger roles in ritual, eventually leading rites themselves. But this is how those of us who have gone that far all began: a quarter called, a door opened, a possibility invited.

The girl calls the spirits of fire with nonchalance; her phrasing is not particularly polished. This doesn’t bother me. I remember when I was her age. I don’t think I realized how impressive a thing I had done then, either.

I am preparing the feast – lamb kebabs, with onion and parsnips – when I see him through the kitchen window. I don’t believe it at first; the last time I had seen him, he had big hair and a bigger mustache. But I hadn’t seen him in about fifteen years, so perhaps it’s not surprising that his hair had gotten shorter and grayer. (I still missed the mustache.)
I ran into the living room. “Dad! Get out here!”

My father looked up from telling one of his infinite stories. “What? What’s going on?”

Families all have their missing cousins – the ones who packed their bags and left for other places, their memories enshrined but their presence absent. Jimmy was one of ours. He had been a part of our coven when I was a child, but he had long ago moved to California with his wife. I hadn’t heard his voice since I was eleven or twelve. We were friends on Facebook, but that’s a pretty tenuous connection.

And there he was.

There was a look that came over the faces of my parents’ generation when they realized who this gray-haired stranger was – a look of joy that I hadn’t seen on any of them before. For a moment, as they crowded around, demanding hugs and laughs and kisses, they all became young again.

I stayed in the kitchen while they cried and took pictures. I would have time to talk to Jimmy – to hear his astonishment at how different a creature I was from the boy he had last known – later. For now, I would stay inside, a being from another time, watching the joyful past playing out in the yard.

We had three newborns at Ostara this year. I wrote about one of them, Ellie, last year; she was joined by Evan and Julian, the latter just a few weeks old. I can’t remember a time when we had so many infants at a festival; it may not have happened since I was one of those infants. But that seemed fine – what better festival to introduce these new souls besides the spring equinox, resting on the cusp of a young, green world? We spent as much of the festival cooing over them as we did worrying about the ritual. I didn’t get to spend much time with Julian at Ostara.

Julian is the first child of my coven-brother Alaric, the eldest of our crop of second-generation Wiccans, and Jules spent most of the festival being adored by his grandmother and his witchy aunts; getting any face-time with the baby would have taken more effort than I had to spare while running the sabbat. But Alaric brought Julian to our New Moon gathering last night, a more intimate occasion, and I got to see him a little more. Already I can observe Alaric’s features in the baby’s face, and even more, the features of others in his family. Everyone says he looks a lot like his aunt Sarah, my ritual collaborator; I think he has the face of his grandmother, my beloved aunt Elaine.

I suppose anything I could say about Julian – named, of course, for the last pagan emperor of Rome – would be a cliché. He is tiny, holy, marvelous. I spent most of last night watching him sleep. Although I know my feelings are nothing compared to what Alaric and his wife Amanda must feel for him, I had a powerful realization last night as I saw his little chest rise up and down.

We are the inheritors of a family tradition – pagan children, given the glorious gift of our religion and our coven. But it is not just a gift for us to enjoy; it is something we have to uphold, maintain, cherish. Something that we have inherited, with the promise of bequeathing it to our children in turn.

It’s a gift we will someday give to you, little Julian. 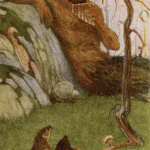 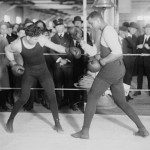 April 27, 2012 Pagan vs. Christian: The Right and Wrong Ways to Go About It
Recent Comments
0 | Leave a Comment
Browse Our Archives
get the latest from
Agora
Sign up for our newsletter
POPULAR AT PATHEOS Pagan
1